Battle of the Nexus: “Blade Runner 2049” is an Over-Stuffed, Slowly Paced Visual Treat 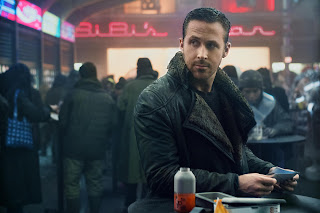 “Blade Runner” is one of those cult films that has just many ardent fans as it has detractors. “Blade Runner 2049” is much like its predecessor in that way. Many will absolutely love it, while many will be scratching their heads and trying to awaken their asleep rear ends. Like the first film, this new trip to the Blade Runner world is sort of a slog to sit through and while its visuals are nice and a handful of scenes are pretty spectacular, it doesn't quite add up to a completely rewarding and fulfilling cinematic experience. In other words, if you think “Blade Runner” is ‘kinda boring’ then just wait until you see the beautiful but lethargically paced “Blade Runner 2049.”

Ok ok, just calling a film long and boring doesn’t add up to much. And it’s impossible to call this movie terrible; it’s far from it. I love the world of this film. I love how the technology that was introduced in the first film has evolved here. (Let’s be honest, the 1982 film hasn’t aged very well) There is ingenious stuff to be found here for sure. I love the film’s take on Alexa-like AI technology. K (Ryan Gosling) has a holographic AI “girlfriend” named Joi (Ana de Armas, giving what is probably the trickiest performance in the film and she nails it). It’s his only real companion. This is a depressing, dystopian future highly reliant on technology of course. I love the grounded reality Gosling and D Armas bring to these scenes. Wonderful. Also great is a stunning performance from Sylvia Hoeks and her bangs, who bring terrifying robotic depth to a fantastic android villain.

Roger Deakins. The go-to brilliant cinematographer. Arguably the best living DP working today. It’s not surprisingly a visually arresting picture. What he can accomplish with light and color is breathtaking. Is this the best looking film he’s ever worked on? Not necessarily, but it’s certainly worthy of praise. I say it’s between him and Hoyte Van Hoytema (“Dunkirk”) for Best Cinematography this year. The same goes for the music; Benjamin Wallfisch and Hans Zimmer’s loud score is fine with faint reflections of Vangelis’ original brilliance. But great visuals and music can only get you so far in a film that’s pushing three hours.

The story is what’s hard to become emotionally involved in. In such a bleak future I find it hard to find anyone to really care about. Hampton Fancher (who wrote the original) and Michael Green’s script has a lot to say about technology and where it’s going. But it takes too long to say it. Is it even possible to describe the plot of “Blade Runner 2049?” I don’t believe in spoiling anything so all I’ll say is that Gosling is a young Blade Runner (one who tracks down and kills Replicants) who’s discovery will lead him to seek out Deckard (Harrison Ford’s character). There’s a mystery element to the film that follows closely to the “noir” style of the original which works here.

Denis Villeneuve is a fascinating filmmaker ("Arrival" and "Prisoners" are damn near perfect) and is graceful when it comes to paying homage to the original film while pushing things forward in a new and interesting way. In a lot of ways he was born to make a Blade Runner film. Looking at the slower paced, deliberate style of his previous efforts, it all makes sense. Every shot is composed so well; I find no fault in the direction, it’s the story that just doesn’t click with me. The performances work, Gosling fits in perfectly playing up his dark, brooding charm that he does best. The Blade Runner world works, and the evolution of this world all makes sense. The films complement each other greatly, but I found the first movie’s pacing is shockingly slow. And that similar pacing and longer running time makes this a challenging film to really love.

Fans of “Blade Runner” are sure to love this new vision. It furthers the story in a way that makes sense, but I can’t really say it offers much to those who never got the appeal of the first film. Movies based on Philip K. Dick stories are always something original to be sure. I always admire the technical aspects of both films. The set design, the costumes, the visual effects are all top notch. The actors are outstanding. The world of both films is unique. The fact that it favors contemplative scenes over action scenes is fine. I’m sure it’ll be remembered as a classic of the genre years from now like “2001: A Space Odyssey.” Don’t really like that one either. GRADE: B-
Posted by Chris at 4:54 PM

Consumer alert most consumers don't find out that they bought hublot replica until after they pay four-hundred dollars for a Rolex that would normally cost around thirteen thousand dollar and it stops working. As long as you eliminate the type of sites that sell tag heuer replica uk you'll avoid that disappointing heartache. To find the good sites, you start by using the proper search terms. In our case, you should be using rolex replica watch. When you find a site, the first thing you need to do is rolex replica. Most sites selling fake jewelry, replicas and look-a-likes place a disclaimer stating or eluding to the fact that you replica watches uk buying genuine brand name jewelry. Next, you need to perform a search on that company and add the term rolex replica sale to your search. For example reviews. If you find bad reviews, move on to the next potential website.

A very good and informative article indeed . It helps me a lot to enhance my knowledge, I really like the way the writer presented his views. I hope to see more informative and useful articles in future.
abcya | hooda games