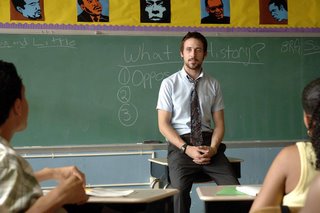 “Half Nelson” is simply and foremost a tour de force of acting. This is a rare movie in which aspiring performers can actually study the film and learn more in 2 hours than in any acting class. The film highlights a surprising performance from Ryan Gosling of The Notebook fame, as an inner city middle school teacher who leads a double life as basketball coach and drug addict. Shareeka Epps plays a young student who has perhaps a stronger affect on Gosling than anything he sticks up his nose. This is a film about a relationship between teacher and student, rescuer and rescuee. The filmmakers, including first time directors Ryan Fleck and Anna Boden achieve a greatness that is immeasurable. They completely draw you in to this world.

Finally a film about drug use that isn’t simply just style over substance. Yes there are the quick cuts and the jerky camera movements, but that just goes with the territory. There is a lot more going on here that camera tricks. The filmmakers take a serious approach to the subject matter and advocate realism over fantasy. A film that comes quickly to mind is “Looking for Mr. Goodbar,” in which a young Diane Keaton portrayed a teacher who spent her nights bar hoping and doing drugs and the film ends in a disgusting, manipulative way that caused the entire film to fail. Here, while I wont spoil how it ends, we’re presented with a scenario that seems all too real and finds a natural way for things to flow and an ending that fits the story extremely well.

As Mr. Dunne, gosling is simple sensational. Perhaps he should start writing his Oscar acceptance speech. No, no yes it’s too early to pick the winner, but he brings something so great to his performance that it just seems like he’s not doing anything special at all. He’s just there and we’re amazed by what he does. As the young Drey, Epps is also an astonishment. What we usually have in teacher/student relationship movies (think Good Will Hunting or Finding Forrester) is that the teacher takes his student under his wing and guides him. This film brilliant flips that tired formula around. Perhaps the teacher is in need of guidance. To say anything else would spoil this terrific and moving film.

As clichéd as it sounds, Half Nelson is a tour de force of radiant dramatic filmmaking. It’s a film, I hope as small as it is, will be able to make a large impression. Whether it wins any awards or not, it deserves to be seen by anyone who even has a slight interest in watching poignant films. GRADE: A-
Posted by Chris at 6:32 PM

I’m going to start this hublot replica by telling you guys its full name – Luminor Submersible 1950 3 Days Automatic cartier replica uk, also known as PAM508 if you’re a fan of the way they code their products. Like all Panerais, it has a simple and clean design and although it’s a very robust watch, panerai replica sale feel crowded in any way. That’s exactly what makes it a super fun watch to sport on your wrist, it stands out very well, while being almost understated at the same time. As I know replica watches uk, the star of this replica Panerai review was released as part of the breitling replica sale collection, being a somewhat limited edition, available in about 1000 pieces. This is not the only Panerai ceramic replica, as you very well know, there are many rolex replica sale and some of them even got reviewed on this blog.