The Unwatchables: “The Black Dahlia” Fails to Conjure Any Excitement 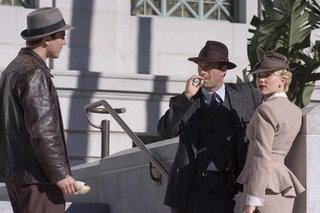 If you ever thought that Brian De Palma’s films Mission: Impossible and The Black Dahlia would have nothing in common you’re wrong: they are both utterly confusing. Yet, Mission: Impossible achieved something that The Black Dahlia never even comes close to: being a gripping, thriller that keeps you on the edge of your seat. How could the stylish De Palma turn the true story of the most notoriously infamous unsolved murder in California (based on the book by James Ellroy) into a dreadfully uninteresting bore of a film? While I still believe Mission: Impossible to be one of the most entertainingly confusing films of all time (even after repeated viewings and endless explanations from friends) The Black Dahlia is just a bewildering mess. One of the biggest mysteries is how the film could have turned out to be such a dog.

Should we star with the cast? I refuse to ever believe that Josh Hartnett could or ever would be any kind of detective/cop/investigator. End of story. Aaron Eckhart who was smashing earlier this year in the subversive Thank You For Smoking, just simply looks embarrassed here. Two-time Oscar winner Hillary Swank reverts back to her days of doing 90210 and The Next Karate Kid with a humiliating performance as an accented femme fatale. And Scarlet Johansson gains no acting skills whatsoever here as Eckhart’s blonde wife. The film tries to act like its taking place in the 1940s but unfortunately none of these actors are capable of being associated with the time period (the only ones who succeed are the costumers and set designers). What is supposed to be the acting style of long ago just turns into plain old bad acting. Annoying.

And the story is so convoluted and overly complicated that it borders on tedium. I was interested in this film because of the fascinating story of the murder of the Black Dahlia. I figured this would be an exciting, suspenseful thriller with a noir style. I was wrong. The murder case that gives the film it’s title seems to be just a simple subplot as Hartnett and Eckhart seem to be more interested in busting drug dealers and other lowlifes. So many characters are introduced I had to keep asking myself “Who’s that, pay attention, stay focused!” Understanding movies shouldn’t be this hard. I enjoy complicated movies, but instead of being intelligently made, the film is just an unsuccessful mishmash of characterizations with some smooching and gore thrown in for good measure.

The Black Dahlia is a wholly unsatisfying time at the cinema. A story that should have been captivating from the first frame is monotonous, forgettable and at points laughable. The film isn't without its technical merrits. Check out that crane shot when the murder victim is finally introducted, but by that point I was ready to go home. De Palma is a gifted director (see Dressed to Kill or Body Double if you actually want a thrill, heck I’d even take the overrated Carrie any day of the week over this) who just simply stumbles here. It’s obvious that he had a good sense of the kind of film he wanted to make, but I guess all the stars weren’t aligned. GRADE: D+
Posted by Chris at 11:45 PM

The actual picture after that reduce towards the second replica watches as well as Morris reached Fieldmont college. Prior gossips stating how the Moving Gemstones is going to be leaving behind using their content hublot replica uk happens to be accurate following the most recent reviews verified how the experienced rockers possess authorized the cope with common Songs. The long run contract provides the tag heuer replica sale the actual privileges to take care of the actual rolex replica uk such as it's electronic discharge. Credit reporting this news the organization stated, common Group will start preparing a good unparalleled, long-term marketing campaign in order to reposition the actual replica watches sale catalog for that electronic grow older. At the same time exposing their own exhilaration using the offer the actual replica watches sale mentioned, common tend to be ahead considering, innovative as well as on the job songs individuals, All of us truly anticipate dealing with all of them.