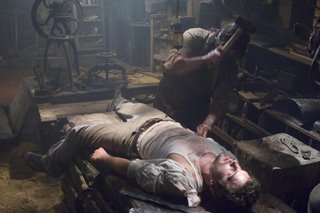 If you have no intention of seeing this gloriously disgusting and repugnantly sadistic exercise in masochistic horrors stop reading right now. There’s nothing I’m going to say to help convince the slightest non-horror fan to see the latest Leatherface flick to hit the multiplex. If you’re interested in how a person could find such disgustingly graphic violence and cruel images a form of entertainment keep reading. “The Texas Chainsaw Massacre: The Beginning” is in no way a terrific motion picture. It doesn’t deserve to be mentioned anywhere along the lines of classic cinema. Heck it hardly deserves to be mentioned with trash cinema. But to horror film fans who delight in seeing the make-believe world of bodies being ripped open from end to end, it’s a splendid piece of putrefied celluloid that is dank, dark, depressing and wholly enjoyable to anyone who gets a thrill by seeing blood being spilled and splattered.

There’s nothing I can really say to anyone to even convince them this is a “good” movie. Even the word “entertaining” is pushing it, because I’m sure many think a person would have to be Jeffrey Dahmer to enjoy such movies. The odd thing is there are many “normal” folks out there who are nice, decent and wholly moral human beings who enjoy watching movies that scare them, sicken them or make them feel like they’ve been punched in the gut. Yeah I’m sure normal’s the word.

So yes, I am one of those people. I enjoy a good kill on screen and it doesn’t have to be particularly scary. And it doesn’t necessarily have to be particularly gory. But it has to be one or the other. While some delight in seeing wizards conjure magic, and lovers bathing in the warm summer sun, and spaceships battling it out in a galaxy far, far away, I’m one of those people who would rather see a teenager get a chainsaw to the gut. Speaking of chainsaws, “The Beginning” actually lives up to its red state influenced title. This is a chainsaw massacre if there ever was one.

Director Jonathan Liebesman begins screenwriter Sheldon Turner’s story of “The Beginning” with the birth, quite literally, of our favorite chainsaw-wielding maniac. Leatherface fans get to see him at work in the slaughterhouse and make his first human skin mask. We get to see how his uncle’s legs were removed and how his deranged surrogate father (an always menacing R. Lee Ermey) became the dying town’s “sheriff.” These cannibals are deranged beyond belief (I guess you’d have to be if you were a cannibal). And into the story comes two attractive couples (the two guys are about to be sent off to Vietnam) who likely won’t have their good looks for long. A traffic accident sets up the rest of the film’s ‘story” and then we get scene after scene of escape, capture and kill. And let’s not forget the car that won’t start and characters asking each other if they’re ok when they been bear-trapped and skinned alive. And why won’t lead Jordana Brewster just get the hell out of there when she has the chance. Did I mention the gruesome scenes of sadism???

I am not recommending this movie for anyone except those who enjoy watching gory thrillers. This movie is sick and repulsive and I was amazed at how it achieved an R rating (Although I’m not actually too shocked). I jumped, I winced, I vocalized, “yeah that’s gross” and I found myself enjoying the entire ride (Even more than the 2003 remake). Do yourself a favor, grab a barfbag, watch this brutal flick and go out for an extra rare steak dinner afterwards. Wow, I never realized how repulsive I am. GRADE: B
Posted by Chris at 11:02 PM

Wow that was odd. I just wrote an very long comment but after
I clicked submit my comment didn't show up. Grrrr... well I'm not writing
all that over again. Anyhow, just wanted to say great
blog!

"To an old TV Example, the redemption color TV, refrigerators, washing machines, air conditioners, water heaters, any of them are possible. Chevrolet Silverado '" Chevy trucks have not historically been known for longevity, but they do offer a great deal of finish
for the money. Its not even a bad idea to pre-choose your hotel and make
reservations before you leave.

Thanks for such a nice content. Apppreciate it :)
Cheers
If anyone interested similar one's have a look here https://sawfinder.com thanks

This article is very good & informative. I have gain so much information from this blog. I like your blog. Thanks for the post.

BTW if anyone interested more have a look checkandpick.com thanks