Mr. Williams Goes to Washington: “Man of the Year” Doesn’t Get My Vote 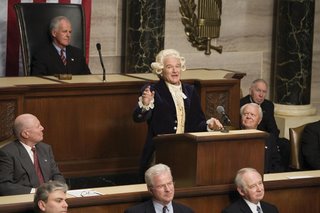 There’s one fact that I know is true: Robin Williams is funny. There’s also a fact that some may disagree with me on: Robin Williams in “Man of the Year” is not funny. How is that possible? Because the film doesn’t know whether it wants to be a comedy when it grows up or a thriller. That sounds just crazy, you may ask. All the advertisements I’ve seen make Man of the Year seem hilarious. Ah hah, seem is the key word. Perhaps the film should have been called “The Illusionist.” Because if you’re in the mood for a hysterical political satire you’re barking up the wrong voting booth. It’s deceptively not the film you’d think it is. If you want to see a funny movie in which Robin Williams becomes president, this isn’t it.

“Mrs. Doubtfire” is my 3rd favorite movie of all time. If you think I’m crazy, I won’t even tell you what number 2 is, but I digress. Robin Williams is a hilarious and genius comic. He has a gift to carry an entire film on the weight of his shoulders without ever outshining his costars. In Man of the Year he just seems like everyone else. He’s Robin Williams playing a less funny version of Robin Williams as a late night political talk show host. (Think Jon Stewart or Bill Mahr) Life imitates art in this film and many people are fed up with the current government (although in this film the current prez is a Democrat). An audience member suggests Williams should run for president and low and behold he does without any real motivation or explanation. Williams is surrounded by a staff who is supposed to be funny including Christopher Walken and Lewis Black.

The film doesn’t really begin as a comedy and then switch genres. We understand right during the opening credits that there’s some kind of conspiracy/cover-up that is going to happen. This mostly involves Laura Linney who mostly looks like she took this role to get a paycheck. I mean she’s good cause she’s Laura Linney and that’s about all. One of her scene’s seems right out of a “Halloween” film, which normally I would love, except it seems odd in a comedy starring Robin Williams. I’ll try not to give anything away but Linney knows something she really shouldn’t and well I don’t really want to ruin anything for you, but a scene in which she goes bonkers attempting to buy a cappuccino is simultaneously odd and funny, yet the audience is completely confused as to what the tone really is.

Writer/director Barry Levinson doesn’t seem to know whether he wanted to write a comedy or a drama. The film feels like it should be a comedy, according to the ads, but it’s really more of a conspiracy thriller with unfunny Robin Williams quips thrown in. All of this I could really care less about if the film was overall just plain fun and entertaining. The dramatic parts make the comedy less funny and the comedy makes the dramatic parts less thrilling. There is a great scene at a presidential debate between Williams the current president and the Republican candidate that I enjoyed. If only the rest of the film could be up to this scene’s standards. It’s funny and poignant and he takes sharp jabs at the current way things are run that are extremely relevant in real life. A stop by Weekend Update at SNL Studios with Tina Fey and Amy Pohler was a much-welcomed breath of comedic air.

If anything “Man of the Year” is just a disappointment and a slight misfire. It’s a movie I can’t really recommend because most people who thing they are going to see a funny Robin Williams movie are going to be in for a surprise. Those interested in a political comedy would best having a double feature of “Mrs. Doubtfire” and “All the President’s Men.” Call me Deep Throat if you want, but “Man of the Year” is a big fat liar. GRADE: C
Posted by Chris at 6:39 PM