Cut it Out: Hopefully “Saw III” is the End to this Blood-Soaked Thrillogy 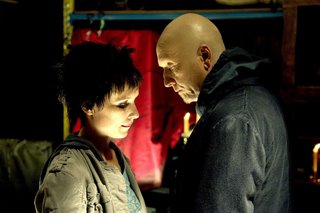 There are some things that Saw III is and some things it is not. Saw III is gross and bloody. What it is not is suspenseful, scary or “Return of the Jedi.” While I’m not exactly a Star Wars aficionado I do know the ending of a trilogy when I see one. But what I don’t get is why the end of Saw III which kind of wraps things up nicely, leaves the door open for Saw IV: A New Beginning. Have the Saw movies, low-budgeted, bloody and wildly popular, turned into the Friday the 13th films of the 21st century? Are we bound to have 10 more installments in which helpless victims are strapped into heavy duty, expertly designed devices ready to gouge, rip and shred up the people foolish enough to be trapped in one? If there’s one thing I’m thankful for the Saw films is reinventing the hard R rated horror film with plenty of blood and guts to make The Passion of the Christ look like a fairy tale. What I don’t like is the style in which these films are made, let’s credit director Darren Lynn Bousman for copying James Wan’s style from the first “Saw.”

I get a headache every time the camera whips around the room in circles, the focus going in and out, and hard rock music blaring on the soundtrack, with an edit every 10th of a second. It’s mind-numbing and headache-inducing. If there’s one thing we can expect in a Saw film is lots of blood and guts. So just linger on it already! You’ve ripped open someone who had metal hooks attached to every one of their body parts so why must you shake the camera so much that we can’t even see what’s going on? If you’re trying to avoid actually showing us the gore maybe you shouldn’t of hired a make-up guy and just pulled a Blair Witch and imply the violent dread. What’s the point of showing a person’s ribcage being torn open if you’re just going to cut away? Ok I may sound like a freak here, but the camerawork of Saw III (and all of them) is the most annoying thing about them. It’s supposed to be stylistic, but it’s not.

While I didn’t love the second Saw installment, I must say the plot of it was more interesting than Saw III. Here we have our villain Jigsaw, a cancer stricken patient on his deathbed (ooo scary!) and his apprentice Amanda, who was a victim in the first film. It turns out she was in on the torturous events of the second film, and there’s something that we’ll learn about her and Jigsaw that is mildly interesting (No, Jigsaw is not her father). They have kidnapped a surgical doctor and placed a device around her neck that will make her head blow up if Jigsaw’s life-support machine flat lines. And let me just say this guy’s about 20 minutes away from death. He has to be kept alive so that he can witness the game that is being played on a man who has lost his young son to a hit and run driver. This man is all about vengeance so it’s Jigsaw’s job to torture him until he realizes that he should give up trying to find the man responsible for his son’s death. Jigsaw isn’t just a sadistic cancer patient, he makes people realize the value of life. That’s something you don’t see in a Jason flick. We don’t get to learn anything about this guy, which is why I liked the second film better, because we get to see the people work together to escape the torture house, and see the evil that is waiting inside every human being.

There are some pretty decent death scenes in the film but the camera moves so fast or scenes are so under lit that it’s kind of hard to tell what’s really going on. We get a woman who freezes to death, a man stuck in a huge bin with pig guts nearly drowning him, and let’s not forget the guy in the twist-o-matic, in which his arms and legs get twisted so that his bones break and protrude from his flesh. Okay if this all sounds gross, maybe you shouldn’t see the movie, but it’s surprisingly not as gross as the second installment. And it’s most definitely never scary. The parts I did like were going back to the beginning (the first film) and seeing things we know now that we didn’t know then. There are some interesting surprises that fans of the series will look forward to seeing.

All in all, Saw III fits the other films well. If you like sadistic horror, this is your ticket. Unfortunately the film isn’t scary or that well made. It’s obvious that the filmmakers are amping up the visuals to make up for the lack of budget, good acting, plot, yada yada. But do we really care about any of that? I don’t think artistic merit is on the menu when you buy a ticket to film called Saw III. GRADE: C

Attractive section of content. I just stumbled upon your website and in accession capital to assert that I get actually enjoyed account your blog
posts. Anyway I'll be subscribing to your feeds and even I achievement you access consistently quickly.