American Psychos: Bening is a Cut Above the Rest of the Crazies in “Running with Scissors” 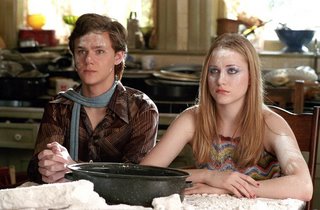 If we can’t laugh at life’s quirky events while growing up, what can we laugh at? Unfortunately in the film adaptation of Augusten Burrough’s memoir “Running with Scissors,” there’s not much that’s funny. What read as funny on the page doesn’t necessarily translate well to the big screen. The eccentricities of Augusten’s childhood and teen years read very well in a book that acts like a bunch of wild vignettes about his mentally unstable mother and moving in with her even more mentally unstable psychiatrist and his odd family. Burroughs makes life’s little tragedies and peculiarities into extremely hysterical and emotionally truthful episodes, but as a film director Ryan Murphy (creator of TV’s Nip/Tuck) has turned this story into a awkwardly toned, dramatically inconsistent film that doesn’t always work.

The cast is top-notch and they do very well with the translation that Murphy has written. Annette Bening gives a tremendous performance as Deirdre, Augusten’s wildly unstable mother. All she wants to be is a famous poet. She feels she was destined to be a renowned auteur. Her son Augusten (Joseph Cross) feels he was also destined to be great: as a beautician and perhaps the head of a major line of beauty products: perhaps the next Vidal Sassoon. Augusten’s alcoholic father played by a restrained Alec Baldwin soon leaves the Burroughs’ home after he and Deirdre decide to call it quits. So it’s just Deirdre and Augusten until she begins seeing Dr. Finch, played by an unrestrained Brian Cox. We soon get to know Finch and his wildly eccentric family (and that’s an understatement). These people would have driven the Brady Bunch out of the neighborhood. The eldest daughter Hope (Gwenyth Paltrow) is a Bible dipper (don’t ask) and works at Daddy’s office. I wanted to see more of Hope (she’s has a large part in the book). The younger daughter Natalie (Evan Rachael Wood) enjoys hooking people up to her dad’s old electric shock therapy machine. Then there’s my favorite of the Finch crew, the matriarch
Agnes enjoys watching corny old horror films and munching on dog chow. I was waiting for Nomi from “Showgirls” to join her. This clan lives in a dilapidated old Victorian house. They certainly give the Addams Family a run for their money.

While the book focuses a lot on Augusten’s adjustment to moving in with and then becoming a part of the Finch family, the film focuses more on Deirdre’s psychological issues. This in turn let’s Bening steal the film away from her talented co-stars without them even knowing it. While mental unstableness isn’t really a laughing matter, Burrough’s crisp writing had a strong sense of satire that was funny yet emotionally powerful. While reading you’re always either laughing or feeling sorry for the beyond strange circumstances this young teen found himself in. He had no boundaries as a child, no rules. And neither does the film really. The film isn’t as emotionally grounded as it could be. And since the dramatic intensity is pushed up it unfortunately undercuts the comedy aspect. There are parts that are funny and will make you laugh, but other parts that should be funny rarely are. And some scenes either weren’t funny or emotionally satisfying. Some parts just kind of hung there as if Murphy couldn’t decide what was funny or dramatic.

Any success of the film rides on Annette Bening’s powerful performance. Not as satirically funny as she was in “American Beauty” or Joan Allen was in “The Upside of Anger” and not as hopelessly pitiful as Ellen Burstyn in “Requiem for a Dream.” Her character seems harsh and unpleased at first, because she is, but you do eventually feel sorry for her once you realize what a whack job her shrink is. While Bening’s acting raises the film to another level, I almost wished her character didn’t take up so much screen time. Life at the Finch’s house for Augusten was more interesting to me, when it was treated as comedy. I wanted to know more of the oddities of the Finch home, and more about what it felt like to grow up in that crazy house, which fortunately I know since I’ve read the book.

This is a wildly inconsistent adaptation of Burrough’s novel, but the actors do a good job and the film is mildly engaging. It’s obviously difficult to squeeze in everything from the book, but turning up the dramatics just seemed unnecessary. The book is funny so the film should have been too. While the film is a decent time capsule of the 1970s (I dug the soundtrack) I can’t help but feeling an emotionally empty film that could have been a lot more grounded and focused. While the film works on some levels, it’s certainly a step down from Burrough’s wonderful novel. GRADE: B-

You really make it seem so easy with your presentation but I find
this topic to be really something which I think I would never understand.
It seems too complicated and extremely broad for me. I'm looking forward
for your next post, I will try to get the hang of it!

Thank you because you have been willing to share information with us. we will always appreciate all you have done here because I know you are very concerned with our. watch american grit

Since computerized silver screen has come into the photo, the way films were made has changed radically. Prior advanced and video projections were utilized as a part of Theaters. tgv Malaysia