Stars & Stripes Forever: “Flags of Our Fathers” is More Than the Flag-Waving Film You’d Think It Would Be 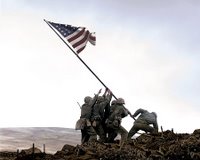 “Flags of Our Fathers” just very well may find itself on the ballot for Best Picture this spring at the Academy Awards. Of course that would just seem like Clint Eastwood overload after Clint’s previous two Oscar-grabbing efforts “Million Dollar Baby” and “Mystic River.” One can’t help but wonder what the heck Clint is putting in his gin & tonic to help him make such fantastically successful films. While it’s easy to dismiss his latest directorial effort as just another World War II drama trying to impersonate Steven Spielberg’s genre defining “Saving Private Ryan,” Eastwood’s film is much more than just elaborately staged battle scenes with emotionally charged performances. It has an interesting story to tell, based on actual events no less, about the Battle of Iwo Jima and the effect that one particular flag raising had on entire nation sick and tired of war.

It’s obvious from the time we live in that war films no longer have the flag-waving “proud to be an American” feel they way they did back in the 40s and 50s. War films are constant truthful reminders that war is an evil that no human being should have to suffer; yet thousands have, do and will throughout the years. The story of Flags of Our Fathers revolves around the infamous photo of several American soldiers raising an American flag upon the top of a mountain during the Battle of Iwo Jima in the South Pacific. This image forever changed the view of the war. Americans were tired of war but the government insisted that they press on and continue to fight. The image represents the American can-do attitude and it instantly became a staple of America’s hope to come out on top during this tragic period in time.

Eastwood’s film certainly does justice to this extremely interesting story of war being sold as if it were popcorn at a movie theater. War can very well be a product and the waning American people’s interest in supporting the fighting turned around as soon as the government turned those men who raised that flag into a symbol of helping support the war, “buy war bonds!” The cast Eastwood has assembled is simply wonderful. Ryan Philippe is as strong here as he was in “Crash.” The same goes for the other assorted young men including Jesse Bradford, Barry Pepper, Jamie Bell, Joseph Cross and the relatively unknown Adam Beach who turns in a great performance as Ira Hayes, an Native American who is constantly the target of disgusting racial discrimination.

What is so interesting about the film is the way its two stories are intertwined. We get lots of footage of the actual Iwo Jima battle that many will agree seems to be in direct comparison with the opening scene of “Saving Private Ryan.” But give Eastwood credit, these scenes are very well done (the DP is John Stern) and certainly stand well on their own. A simple flag mounting on the island and its photo is enough to change history. We get to see the soldiers as they reenter society as heroes. The photo is in every newspaper and monuments are erected. These men aren’t just turned into heroes of Iwo Jima they are turned into an image of how America is the best and we can overcome anything.

What a perfect time for a film like this to come along with our current state of affairs overseas. It’s so simple to turn one image into something completely different. Writers William Broyles Jr. and Paul Haggis (Crash’s Oscar-winning screenwriter) craft an interesting story about war, hope and heroism that will certainly make people think about the parallels of present day. In a time where so many are being killed everyday, maybe a movie can help many of us change our minds for the better. GRADE: B+