Do You Believe in Magic: “The Prestige” Offers Enough Twists and Turns to Keep the Viewer Engaged 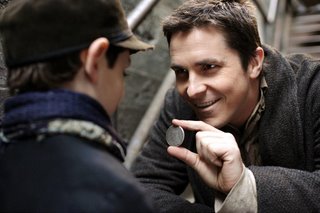 I enjoy watching a magician perform feats of magic just as much as the next guy. As a little kid I always wanted to know how they did it. How did he guess that person card? How did that coin end up in that lady’s purse? How did David Copperfield make the Statue of Liberty disappear without the use of CGI? But there’s one thing I know I would never want to see: a performer drowned alive right before my eyes. And what about sawing a lady in half? I remember being terrified that severed body parts would spurt out from the stage. So not only is magic exciting it can also be kind of freaky and disturbing. Director Christopher Nolan takes the excitement and apprehension of magic and concocts an intriguing tale of two rival magicians well played by Christian Bale and Hugh Jackman. While the film isn’t perfect there are worst things to do with your time.

The film is set during the brink of the turn of the 20th century in England. Jackman and Bale along with assorted others, including Jackman’s wife (Piper Perabo) are part of a magic stage show. Without giving too much away, a terrible tragedy occurs. This incident rather abruptly leads to a chain of events, which sparks a heated, and at times extremely vicious, rivalry between the two leads. What was once for the betterment of the forefront of magic has become a whirlwind of “anything you can do, I can do better.” A 19th century version of "Yo Mamma" if you will. Bale and Jackman are good at playing nice, friendly men or mean, evil men. And here they mainly channel evil and so it’s hard to really side with either character. We slightly understand the motivation behind each one, but it’s a lot more complicated than he’s the good guy and he’s the bad guy.

It’s practically impossible to describe the film without revealing important plot points and twists. What can be said, without regards to the story, are its artistic merits. The film is virtual tour de force of costume and set design. The art direction is simply spot on, not that I’m an expert in this particular time period, but I image this is exactly how it would look. The camera work is equally dark, gloomy and beautiful. Nolan is an extremely gifted filmmaker who is always bringing a strong sense of dread, mystery and darkness to his films (Memento, Insomnia, Batman Begins). The acting is also very good. While no performer out acts another, nor gives the most impressive performance of the year, what we are given are people that we believe to have existed during the film’s time period. It was actually refreshing to hear what I think is Bale’s native accent. The supporting cast which includes Michael Caine, David Bowie and Scarlett Johansson doubling as a love interest and magic trick spy. Rebecca Hall plays Bale’s wife and their relationship is consummated so quickly I hardly bought that they were in love.

The plot, which I can’t really describe beyond the fact that to call this a period thriller makes good sense to me, is twisty without really being confusing. We get fragments of the past and present but the time line isn’t as screwy as Memento. After all what good is a story that is too twisty to actually follow? It’s pretty interesting where the film leads. It brings up some moral issues dealing with the theme of fantasy vs. reality and illusion vs. science. This helps raise the film beyond the level of simple entertainment.

For all the fancy sets, camerawork and costumes, what we really have is a story of two men not willing to let each other get in the way of their magic acts. The film’s title refers to what is called the third part of a magician’s act: the prestige, but it also more importantly refers to the status both men are willing to achieve at ANY cost. Of course there’s a whole lot more to it, but why should I give away the secrets and spoil the magic? GRADE: B+
Posted by Chris at 10:13 PM

When using such a solution, you will be asked to talk about the events that affected you in the
year, marriage, new baby, move to a new house, started college, changed employment status,
etc. When working under GAAP, revenues and gains have
completely separate definitions. Itemized deductions and personal exemptions do
not affect self-employment taxes.