Boston Illegal: Martin Scorsese’s “The Departed” is a Fascinating Masterwork of Writing, Acting, and Directing 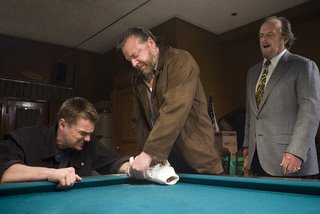 I’ll be the first to admit that I’m not one of Hollywood legend Martin Scorsese’s biggest fans. I saw his remake of Cape Fear a while ago. It’s decent. I rented Taxi Driver from the library years ago. It was all right. I sat through all 2.75 hours of The Aviator two years ago. It was okay. I probably responded most to The Aviator. It had extremely great things going for it: a good cast, a wonderful look, just an overall great production. I couldn’t help but think there was just something missing. And so I have yet to see any of his other films, for I have felt none of the ones I’ve viewed were anything too special. And now comes The Departed. A turning point for both the director and I. Perhaps I’ll give his other films a shot, perhaps the filmmaker will get an Oscar. But more importantly this is a film in which all of his others from now on will be judged.

Scorsese starts in a new location, Boston, MA. It is the land of overly pronounced As, the Red Sox, and Irish crime lords. One of the latter being Jack Nicholson in one of his best performances (and you know that’s saying a lot) as Frank Costello. Here is a less campy Joker from Batman; a tough talking’ racial slur speakin’ tough guy with many an evil expression to spare for the film’s quickly paced 2 1/2 hour run time. To put it simply just give the man his fourth Oscar already and call it a night (In fact just give everyone an Oscar). But there’s plenty more astounding actors from where that came from. We get Leonardo DiCaprio, finally completely convincing, as an undercover cop infiltrating Costello’s crime ring. On the other side Matt Damon is part of Costello’s gang who has trained to become a cop and he might as well be called Evil Will Hunting. These characters set up what could have easily become a tired retread of other lesser-made crime thrillers. The cast elevates the material extremely well. Also great here are Martin Sheen and Mark Wahlberg who are the only ones who know of DiCaprio’s mission. Alec Baldwin also shows some great acting chops. Vera Farmiga is just about the the only female in the cast and she's terrific as a link between DiCaprio and Damon.

While the film isn’t as visually scrumptious as The Aviator there is plenty of terrific technical aspects worthy of note. The film maintains a frenetic energy without the use of overly shaky cameras or quick fire editing. The imagery is extremely strong. Scorsese, not known for his restrained use of graphic violence, uses the brutally potent images to shock and let you know not everyone in this world is a saint. I also enjoyed the use of music. While Howard Score provides a score, most scenes are filled with rock-pop Irish jigs and most notably The Rolling Stone’s “Gimme Shelter.” Not only is the music pleasing to the ear, but so is the dialogue. While disgusting racial and homophobic comments, including other pervasively colorful language, fill the character’s mouths, it’s hard to argue that screenwriter William Monahan hasn’t created pure poetry with each spoken line. And boy do I love those Bawston accents!

“The Departed” is a wholly enjoyable movie that has to be seen to be believed. Every cinematic element is spot on. The story is exciting and works like a thriller, but it’s so much more. It’s a superbly entertaining piece of art. This is a great example of a film, a collection of sounds and images that are put together expertly to create a thoroughly pleasing experience. This is filmmaking at its best. GRADE: A