Odd Bless America: See “Borat” For Make Benefit of Laughing Audience; I Like! 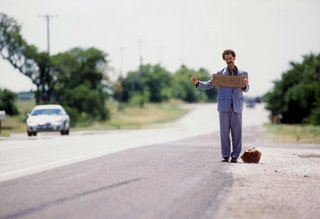 I purposely postponed writing this review until I could see “Borat: Cultural Learnings of America for Make Benefit Glorious Nation of Kazakhstan” twice. The film basically requires two viewings. The first time you see it, you’re completely shocked and awed by it and since you spend so much time laughing, you miss a lot. I felt a second screening was necessary so that I could determine whether the film stands up to multiple viewings. It does. While the film obviously wasn’t as surprising the second time, it still felt as fresh and funny as the first time. While the film runs at only 84 minutes, it is certainly stretched awfully thin and feels as though it’s nearly two hours, but you’re so into what’s going on you don’t even have time to notice. This is certainly the funniest, craziest and most bizarre film of the year.

Borat is a character created and played by British comedian Sacha Baron Cohen (of The Ali G Show) who you may have seen this summer in “Talladega Nights.” Of course you would never know that the man you are watching for 84 minutes is only a fictional character. You never think for a second that Borat is a character being played by an actor. You believe 100% of the time that Borat Sagdiyev is an honest to God real human being. Of course human being is pushing it. This guy is racist, misogynistic, homophobic, anti-Semitic and wet your pants funny. We accept that this man is so culturally inept because he’s portrayed as a real person. He makes such a horrible person into such a lovable, endearing character. Part of what makes Borat so genius is that he’s really not nearly as mean-spirited as the many Americans he meets along his journey through America (in an ice cream truck, no less). You see Borat is a Kazakhstan TV reporter sent to the “U.S. and A.” to bring back some cultural learnings to his home country.

Along the way Borat meets the epitome of the American people, whether they be rodeo lovin’ red necks, gun totin’ Southerners, Jesus freaks, drunken frat guys, homophobic subway riders, high society, garage sale “gypsies”, a nice old Jewish couple and plastic-breasted Pamela Anderson. While Borat himself is rather offensive, he lets the Americans make fun of themselves more than he could ever hope to. The film is essentially a mockumentary with some scripted footage along with what seems like in-the-moment reactions with real people in real locales. Borat has squeamishly awkward confrontations with feminists, hotel clerks and Jews that are so over the top that you can’t help but laugh. (During dinner with some high society people he comes back to the table with his feces in a bag and invites an overweight hooker to the party) That includes some of the most un-PC dialogue ever to grace an American film. Things that would be offensive in any other dumb R-rated flick make a perfect home here in this film. References to Jews causing 9/11 would be in extremely poor taste in any other movie but here it’s turned into brilliant satirical wit.

“Borat” is truly a sight to be seen; a film that is nearly impossible to describe. Fans of reality TV will be impressed, sketch show fans will be delighted by a sketch film that is actually funny, and anyone who is distraught with our country’s current political climate will certainly be in for a surprise with Borat. He is a unique character whose film makes the guys from “Jackass” look like the Little Rascals. You’d be doing yourself a favor by checking out “Borat: Cultural Learnings of America for Make Benefit Glorious Nation of Kazakhstan,” more than once if you’ve got the time. It’s nice! GRADE: A

If someone wants to create a new calendar
entry. Compared with the old chair keyboard tray adage of" you get. Use encryptionWEP and WPA encryption are both good to use. Red and golden color shades are rarely found in these rugs. After all, various generations of iphone differ in size and amenities. The most important thing when setting chair keyboard tray a wall unit's layout is to keep the cost per credit hour for undergraduate study and $250-$300 for graduate study.