Do You Hear What I Hear: “Babel” Offers an Intriguing Patchwork of Characters Lost in Translation 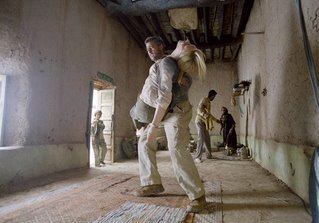 Babel is a complicated and mature film that interlocks the stories of several characters all of whom are of different races. Sound familiar? This isn’t a rip-off of last year’s Oscar-winning “Crash” but it is certainly just as well done. Of course it’s not as “in your face” about its statements how people from different cultural backgrounds relate to each other. It’s simply the story of how a deadly riffle ends up in the hands of two young Moroccan boys and the tragedy that unfolds before the audience. It is a film filled with sensationally subdued performances from a racially diverse cast.

Brat Pitt and Cate Blanchett are Richard and Susan a married couple vacationing in Morocco. While riding a tour bus an unseen object strikes Susan. She’s bleeding erratically. This is serious. In the previous opening scene we’ve seen a man giving two young boys a riffle to be used to scare of animals that might try to eat the family’s flock of sheep. Unsurprisingly the boys decide to shoot the riffle into nothingness and then into driving vehicles far in the distance. One of those vehicles is a tour bus. There is also the story of promiscuous Japanese teenager Chieko (Rinko Kikuchi in her first American film) who is deaf. Her and her father are also connected to the riffle.

Meanwhile back in the states, Richard and Susan’s two WASP children are being taken care of by their Mexican nanny Amelia (an effective Adriana Barraza). She and her nephew (Gael García Bernal) have to travel to Mexico to go to her son’s wedding and since she can’t find anyone to take care of the little tykes (Susan’s accident has prevented them from coming home on time), she takes them and their passports along for the ride. This will prove to be an obviously terribly rash decision. Two Mexican’s traveling across the border with two Caucasian children is unfortunately not a good situation.

Director Alejandro González Iñárritu has crafted an intriguing tale of characters who all speak different languages whether it be Spanish, English or even sign language. What we have is a morality play about how difficult it can be for people of different backgrounds to really understand each other. Iñárritu’s direction of Chiecko’s scenes is especially effective due to his way of immersing the audience in the world of a deaf girl. Pitt performance here is subtle but strikes a nerve that he has rarely evoked in the past. Barraza has a strong emotional weight as the children’s caretaker and the scene in which they attempt to cross the border into the U.S. crackles with suspense.

Iñárritu has crafted a meaningful, well-made film that is a terrific follow up to his “21 Grams,” a film that is equally emotionally riveting. In a time where immigration is the talk of the town, perhaps we should follow the film’s extremely useful and wise tag line: “If You Want to be Understood... Listen.” All that wisdom for the price of a movie ticket. GRADE: B+