You Say You Want a Revolution: “Bobby” is a Nostalgic Look Back to an Age When Politicians Could Be Heroes 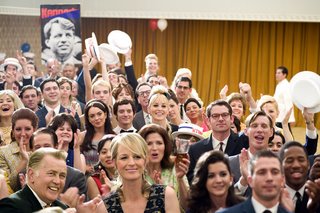 It’s hard to imagine Emilio Estevez writing and directing a movie let alone one about the assassination of Robert F. Kennedy. Yes, the former Brat Packer has gathered enough stars to make the show Will & Grace jealous for a film that isn’t so much about RFK’s death as it is about what was going on in America around the same time. The film opens up with a brief history of what the U.S. was like in 1968 with the war still raging in Vietnam and the public’s dismay of the never-ending bloodshed (sound familiar?). The best parts of Estevez’s film are the bookends, the instant nostalgia trip opening and the closing scenes in which all of the film’s characters intersect as RFK’s assignation is carried out. The middle however is chock full of Irwin Allen-esque movie stars that seem to be awaiting some kind of natural disaster.

While the film doesn’t really do anything new with the ensemble cast drama (think Crash, Magnolia, or Nashville) it presents us with interesting enough characters to last us two hours. It would take three full reviews to even begin to mention the entire cast, which is made up of the prestigious (Anthony Hopkins, Helen Hunt, Martin Sheen etc) to the not so prestigious (Heather Graham, Ashton Kutcher, Joshua Jackson etc). It’s obvious from the film’s ideals that Estevez certainly doesn’t segregate the good actors from the bad ones. Let’s not forget the has-beens (Demi Moore, Sharon Stone, Estevez himself) and the up and comings (Lindsay Lohan, Elijah Wood, Shia LaBeouf). There is what seems like a million more from where that came from. Each character has their own backstory which together plays like a microcosm of the American people of the time. This includes women marrying men so they didn’t have to go to war, the plights of people of color, tripping on acid for the first time, adultery, and political campaigning.

The movie weaves many plotlines without ever really confusing the audience. But maybe that’s more of a complaint than a real compliment. After all with so many stories and characters (more than 20) it’s impossible to be very in depth. The movie sort of plays like a long pilot of a TV show, taking it’s time to establish the characters and their motivations so that we can be hooked for the rest of the season. What Estevez skimps on in terms of storyline depth he makes up for in political idealism. It’s extremely interesting watching the stories unfold at the Ambassador Hotel in California during a summer primary election. Senator Kennedy will be at the hotel to give a speech and what will be his final public appearance before his untimely death.

The problem with these characters is that on the surface their troubles seem completely unimportant when played against the backdrop of RFK’s assassination. Since the killing only occupies the film’s last quarter, it almost seems as if it was an afterthought, a climax so dramatic and tragic that perhaps the characters will become better people because of it. Actually the ending scenes are far more intense and dramatic (with a voiceover of one of Kennedy's most powerful speeches) than anything we had previously seen in the film.

While the characters’ stories in “Bobby” seem insignificant when compared to RFK’s tragic death, the film certainly is an interesting ode to the chaotic time period. It does a great job of evoking the era without the gratuitous use of popular 60s rock tunes (with the exception of the well-placed "Sounds of Silence). RFK was an important man, and Estevez has crafted an intriguing look at a time when people actually looked up to politicians with a glint of optimism in their eye, instead of daggers and false hopes. GRADE: B