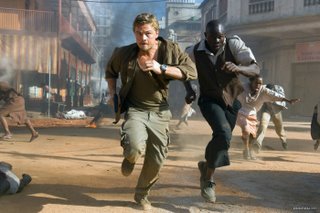 I’ve never found Leonardo DiCaprio to be an actor with very much range. That isn’t to say that he hasn’t tried a variety of roles, many of which I haven’t found him very compelling in. Earlier this fall I utterly enjoyed DiCaprio in Martin Scorsese’s brilliant crime thriller “The Departed” and wouldn’t you know he’s just as enjoyable in Edward Zwick’s thrilling “Blood Diamond.” Both films are gritty and share themes of violence and greed and neither shy away from fully exploring the violent human mind. While it might sound weird at first to hear a South African dialect come out of the same guy’s mouth who started his career on the TV sitcom “Growing Pains,” DiCaprio and the rest of the cast deliver a wonderfully enjoyable story about the morals of the ravenous human condition.

The film is set in the 1990s in the western African country of Sierra Leone. There is a brutal (and that’s an understatement) civil war raging on. The rebels kidnap the adult male locals and force them to search for diamonds, to be unlawfully traded. The boys are sent to rebel training school, which includes machine gun target practice with dummies and live humans. The women and girls are of no use. The boys are completely brainwashed to honor the rebel army. One man who is taken from his family is Solomon Vandy (an intense Djimon Hounsou). While being forced to dig for diamonds, he comes across a large one that will set the film’s entire plot in motion (cue the McGuffin). Solomon is able to bury the diamond for safekeeping and is able to escape his rebel army captors. He hopes the large diamond will be a key in reuniting with his wife, daughters and son (he of whom has begun rebel army training).

Let’s enter DiCaprio in his best performance since “The Departed” as mercenary Danny Archer. Danny is a character who is constantly doing something that is wholly not “the right thing.” He smuggles diamonds and is sent to prison where he hears about Solomon’s hidden diamond. The diamond will mean a big fortune for Danny and could mean a family reunion for Solomon. And so begins a relationship that isn’t exactly what you would call buddy-buddy. While we get to understand DiCaprio’s character it’s hard to predict how he is going to act, which causes tremendous anticipation in the viewer. Danny knows in his head he’s basically just using Solomon to get the score of a lifetime. American photojournalist Jennifer Connelly also realizes this. She befriends both Solomon and Danny on their amazing journey through rebel territory to recover the “conflict diamond.”

This film not only offers a plot that is exciting and completely enjoyable but offers a realistic and moralistic tone that isn’t preachy or forced. We learn early on that people are tortured (i.e., hands lopped off) just so that illegal diamond trade can exist. And where exactly do these precious stones end up? Most likely on your favorite gal’s ring finger. The film does an incredible job of raising awareness of an important issue that I personally had no knowledge of. It’s horrible to think that so many innocent people are killed just so a woman can have an engagement ring loaded with karats.

The film is brutally realistic in a documentary/Schindler’s List kind of way, but it’s never gratuitous. It just helps it feel real. You almost sense that the filmmakers actually shot scenes in this conflict zone. And while the film does use a non-fiction backdrop to tell a fictional story, it almost seems too real to be just a movie. This is a film that shows that violence is occurring in other countries besides Iraq. This isn’t only an intelligent and suspenseful drama, but it has an actual soul. If it causes one person to think about where exactly the diamond came from on their ring and who had to die just so she could have it, then maybe it’s true that art can change the world. GRADE: A-

Thanks , I've recently been looking for info approximately this subject for a
while and yours is the best I've found out till
now. But, what concerning the bottom line? Are you positive
about the source?