Like a Surgeon: Partying Travelers Run Into the Brazilian Organ Harvesting Massacre in “Turistas” 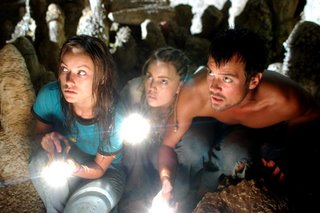 Vacation movies can go either way: sidesplitting comedy (National Lampoon’s Vacation, European Vacation, etc) or gut wrenching horror (Hostel, Wrong Turn etc). I think National Lampoon should start making horror films. If they did, they’d end up with National Lampoon’s Brazilian Vacation. But it’s already been made as “Turistas,” in which some South America-bound hotties looking to have a good time end up being unwitting organ donors. Director John Stockwell, (Blue Crush and Into the Blue) known for showing off outside body parts finally gets to show us the inside parts and display enough graphic surgery to make the show Nip/Tuck blush.

We start off with a young woman being strapped down to a table. She’s shaken and disturbed. She cries out “I want to go home.” At this point most people are going to want to take her advice, however, if you enjoy the typical hot vacationers + weirdo locals = graphic torture, you’ll probably want to stick around. Big brother Alex (Josh Duhamel) is chaperoning his sister Bea’s (Olivia Wilde) and her friend Amy’s (Beau Garrett) Brazilian vacation. Somehow the tour bus they’re on ends up at the bottom of a hill, so they’re stranded for hours until the next bus comes. They meet up with fellow travelers Pru, Liam and Finn and party all night at bar located right on the beach.

I’m sure you can guess what happens next. They wake up the next morning in a tub of ice and their kidneys have been removed! Well not exactly. They are drugged and robbed. But unfortunately it takes awhile before any graphic surgery takes place. Meanwhile a local named Kiko takes them on a ten-hour hike through the jungle to his uncle’s cabin in the middle of nowhere. They stop off at some underwater caves for no other reason except for the establishing fact that these caves exist so that when the final chase occurs we’re familiar with the locale. They finally end up at the house, with no one home. In the middle of the night, the surgeon and his team arrive, and some internal organs are finally spilled.

While there are some “suspenseful” early moments, a modicum of impending doom, and some gory parts (finders being cut off, a stick in the eye) the film doesn’t take as long to get to the good stuff as Hostel did. Hostel was definitely a National Lampoons movie that took way to long to get to the gooey goods. Turistas doesn’t take quite as long and even though there’s really only one major organ removal scene, it’s quite graphic and disgusting. It’s obvious that this film is one 10-blade (I'm a Nip/Tuck fan) slice away from an NC-17 rating.

Turistas is definitely standard horror movie stuff. Fans of the genre should enjoy it but everyone else will want to take the film’s opening “I want to go home” advice. I’m sure I could make up some kind of meaningless cinematic reason to see the film. The cast’s beautiful bodies are in sharp contrast with the grotesqueness of the situation they find themselves in. Oh who am I kidding, this movie’s a piece of junk. In other words, it’s a pretty enjoyable. GRADE: B-

I really love this post I will visit again to read your post in a very short time and I hope you will make more posts like this.

This will definitely be very useful for me when I get a chance to start my blog. Sell House Fast Florida

This will definitely be very useful for me when I get a chance to start my blog.
Web Hosting in Pakistan

This will definitely be very useful for me when I get a chance to start my blog.
Web Hosting