A Star is Born: “Dreamgirls” is a Moving, Stylish Piece of Musical Cinema 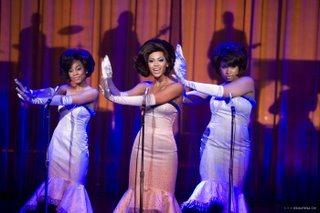 Yes, it’s true that "Dreamgirls" is very good musical; perhaps the best since "Chicago." Of course with films since then such as "Phantom of the Opera," "Rent" and "The Producers" that’s not exactly saying a lot. "Dreamgirls," which was written and directed by Bill Condon (who wrote the Oscar-nominated "Chicago" screenplay), is a movie musical that can be enjoyed by those who don’t know anything about the Broadway show; myself included. When I first heard of the film I assumed "Dreamgirls" was an original piece, however I learned that it was an early ‘80s musical loosely based on the rise of Diana Ross & the Supremes. It has a jazzy R&B sound that employs many talented voices and an intriguing, although not altogether original, story.

Perhaps the headline of the year is the breakout performance of American Idol contestant Jennifer Hudson. The finalist scores the role of a lifetime as Effie, whose emotions and dreams get stomped on when she’s forced out of a smalltown1960s female R&B group (The Dreams). Like big stars before her, she’s destined for big things, but she’ll have to wait until the third act before she gets any hope of her dreams being fulfilled. The other two members of the talented trio are Deena (Beyoncé Knowles) and Lorrell (Anika Noni Rose). Oscar-winner Jamie Foxx becomes the girls’ manager and before you can say Gladys Knight & The Pips, stardom comes their way. Hudson is definitely the standout here, and while she’s not the best actress to ever grace the silver screen, it's impossible to deny the sheer emotional power that she emulates during her song numbers. She moved the audience I was in to tears and thunderous applause; in the middle of the film!

Yes the story is something that been seen countless times before: small town singers hit it big and obsession with fame gets the best of them. But Condon tells his story in such a flashy, entertaining way that you never realize you’ve actually heard it all before. He’s skilled at making the song numbers catchy and engaging, while letting it all make sense. Yes there are times when characters breakout in song, (during catfights, no less) but most of the music takes place on stage or in the recording studio. This is truly a beautifully filmed vision of dreaming big and achieving big time success.

And who could talk about “Dreamgirls” without mentioning the return to form of Eddie Murphy? While I’m not exactly Murphy’s biggest fan, I know talent when I see it and he’s got it. He slips easily into the role of aging Motown star James “thunder” Early. Murphy can actually sing despite having previously recorded “Party All the Time” way back in the ‘80s.

"Dreamgirls" is a well crafted movie musical, with performers and filmakers in top form, that sweeps you up and entertains for its entire running time. It’ll be interesting to see how it does come Oscar time, and while it’s not one the best films of year, you really don’t need to look much further to find such a winning time at the multiplex. GRADE: B+

What do you value most in life. Do you value earthly replica watches sale or do you put more value in the spiritual. Many people put different values to these things. Some people do rolex replica uk mind using their very last cent to buy what they want most. You may be one of those people who will do anything just to own an rolex submariner replica or you may have plenty of money and can afford to buy the best. What is your Achilles heel. What is the one thing that you mind pulling that little bit extra out for. Some people buy the best looking, most well known brands of clothes, others do the same with replica watches or jewelry. Today we will look at some of these rolex replica sale that you go out of your way to find and that you feel just has to be this or that specific make or model.

In any event, it ensures that there would be no issue in regards to transport harms thus. Moving Checklist

Some new players play 3D motion pictures and some current ones may have a 3D overhaul accessible by means of the internet.watch free movies online

There are a whole lot of excellent movies and videos hosted by different sites nowadays.solarmoviesc

Owing to its very easy to navigate, have a terrific search work at the top where it is possible to search movies you wish to download Watch top tv series free online 2018,best views tv series in 2016 Online with HD Streaming For Free

You are able to relax and watch movies absolutely free online.Learn more about classy-films on this site

Now the one thing left for you to do is to seek out a great site that streams media at no cost on putlocker.

You pay just for the movies you wish to watch on Watch free online movies - Movies4k.

Stream Movie Ps4 Tips There are lots of references in the game of the various franchises, and seeing the fights between the many characters is certain to make you grin. Learn about 123movies onlinefree on website.

Furthermore, you may download your favourite videos in HD. Watch full movies online for free - Solarmovie

There are a lot of helpful habits to make sure you eat well, visit the gym and keep the proper mindset on Watch Full Movies For Free - PutLocker.

You can find more details on xmovies8online on the web site.


The most essential part of my Snapchat use was the interviews, all which you are able to view here. Click here to know more about movie4kmovies.

If you aren't able to locate your favourite fmovies or TV collection, just visit the search engine and do a fast search.

If you wish to watch live 123movie, you will have to buy an Amazon Fire TV stick.