Saved by the Mel: “Apocalypto” is a Spellbinding Success Due to Mel Gibson’s Masterfully Sadistic Direction 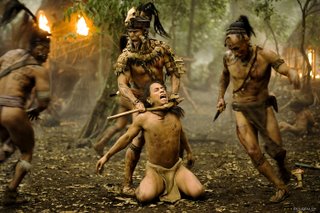 The enjoyment I received from watching Mel Gibson’s Apocalypto is directly proportionate to how much I ultimately didn’t want to see it. I think the common people will agree with me. I was sick of the trailer by the middle of the year when the film was originally slated to be a summer release. A film about an ancient tribe of people who all speak an ancient language, with no familiar faces? Yawn. I had already seen The Passion of the Christ and even though this new film didn’t star the Savior I didn’t want to see that again. But I gave the movie a chance and by golly it’s amazingly good! This sadistically bloody, action-packed epic, which shames gore pictures like Saw with its excessive use of realistic violence, is a completely thrilling film that had me on the edge of my seat.

If there were any film that is Apocalpyto’s opposite in terms of cast it would be the recent Bobby or any Robert Altman film. Gibson, who co-wrote with Farhad Safinia, has chosen to use unknown actors. And by unknown I mean unknown. Seriously, have you ever heard of Rudy Youngblood? I didn’t think so. Mr. Youngblood makes a strong lead as Jaguar Paw who is a member of a close-knit South American (?) tribe deep in the jungle circa centuries ago. His wife is pregnant and they have a young son. Without warning some Mayan pillagers completely ransack the village in a sequence that is brutally realistic as anything seen in Schindler’s List or Saving Private Ryan. Many of the adults are taken as prisoners, leaving some small children behind (including Jaguar Paw's wife and son in a deep hole). And on sets the film’s entire story, which is seen through Jaguar Paw’s fearful but brave eyes. He has no idea what these people have in store for him.

Mel Gibson, who hasn’t exactly been having the best public year ever, proves that he is a tremendously talented person who certainly belongs behind the camera. This is one of the most suspenseful action films I’ve seen in recent memory and it’s emotionally powerful and truthful. The film is essential one long chase, on foot no less, and Gibson applies a sure hand and eye. He has brought a gloriously conceived vision to the screen in a film that in essence shouldn’t really have succeeded to begin with. This could have been a boring, confusing mess, but Gibson knows exactly what he’s doing and has crafted a tremendously entertaining film.

Many will be put off by the fact that the film is, like I said, just one long chase. Jaguar Paw carries the entire weight of the film on his shoulders as his escape from the Mayans makes up most of the film. We really learn little of the Mayan culture or how their society eventually collapsed. We only understand as much as Jaguar Paw can conceive as he is taken prisoner. He and his people are taken to a ritual in which the captives’ bodies are painted blue and their heads are loped off, but not before their hearts are ripped out while still alive. This is a gristly and gory movie that will likely turn off many filmgoers. It’s a movie that doesn’t really glorify the violence, but depicts it as a natural way of life for this ancient people.

Gibson, who deserves a Best Director nomination, has made a film that shouldn’t have succeeded on so many levels, and yet it does. Not for one second was I turned off by having to read subtitles. The detail that was put into the film is extraordinary. You really sense the history behind these ancient people. This is a brilliant story of survival, revenge and family that sucks you in right from the start and never lets go. The two hour-plus running time literally flies by. The film is worth seeing if only for the exciting jaguar (or was that a panther?) chase scene that almost has the power to stop your heart. This is a great film that’s a highly recommended must see. GRADE: A

Its like you read my mind! You appear to know a lot about this, like you wrote the book in it or something.
I think that you could do with a few pics to
drive the message home a little bit, but other than that, this is wonderful blog.
A fantastic read. I will certainly be back.

Take a look at my homepage: after effects wave
text ()

It's actually a great and helpful piece of information. I am satisfied that you just shared this useful information for us.
Thanks for sharing.
cara menggugurkan kandungan
obat penggugur kandungan
obat aborsi
tanda tanda kehamilan