A Christmas Gory: “Black Christmas” is a Treat For Blood Fiends, Fruit Cake for Everyone Else 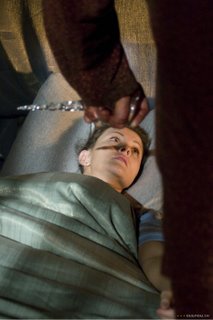 If you thought Arnold Schwarzenegger staring in “Jingle All the Way” was a holiday horror film, wait until you see “Black Christmas.” Horror movies have covered many holidays over the years, from the iconic film Halloween, to the horror-spoof April Fool’s Day to the, killer-in-miner suit flick My Bloody Valentine. I guess it’s only a matter of time until a horror movie is set on Thanksgiving with murderous Native Americans. Or what about a psychotic killer slaughtering voters on Election Day? Somebody please page Wes Craven! It was inevitable that a remake of 1974 not-so-classic slasher “Black Christmas” was in order. While that original film had the benefit of a small budget with some suspenseful moments, this new film is filled with more expensive style and some of the more gruesomely graphic violence since Hostel. In fact there are more gouged out eyeballs than Eli Roth could have ever imagined putting onscreen.

If there’s anything really wrong with this new Black Christmas it’s that it is completely awkwardly structured. I don’t go into a gore fest actually expecting a “well-made film” but I at least want some coherence. A bunch of college girls stay home for Christmas in their sorority house. They basically sit around the house recalling the story of the wacko family that used to live in their sorority house. And wouldn’t you know the psychotic children who used to living there are celebrating a murderous Christmas homecoming. The blandly written girls refer to each other by name when the other is not present, so we have no idea who they heck they’re talking about. They’re like, “Where’s Clair,” or “Have you seen Kelli?” And I sat there thinking who the heck are they talking about? Director Glen Morgan hardly has character exposition in mind, but at least he gets spends little time getting to the good stuff. And while the girls sit around drinking wine, the sorority mother (do these even still exist?) entertains the girls with the backstory of wacky Billy and how he killed his family and now lives in a mental institution. These flashbacks, although filled with cool angles and a sense of style, should have been regulated to the opening of the film instead of breaking up the present day scenes.

This is one of the most gory films I have seen in a long time. This movie puts The Hills Have Eyes, Hostel, Saw, etc to shame. The violence is old-fashioned 1970s exploitation gruesomeness and you couldn’t ask for anything more in a film set on the wonderfully cheery holiday of Christmas. And Morgan lingers on the blood. He doesn’t cut away or use flashy editing to make it “scarier.” I’m talking bloody close-ups galore! This film, like the Final Destination films, (in which Morgan and James Wong made together) has some of the most exciting and original deaths in recent memory. And this is perhaps the only film in which I’ve seen a death by candy cane.

Anyone who is fan of the splatter film will rejoice for Black Christmas. While the film isn’t necessarily “scary” or “suspenseful” it has enough style and blood to please fans of the genre. And of course it has the necessary scary moments to make the annoying teenage girls in front of me to squirm in their seats. Now here’s hoping that the sequel finds Father Time offing sexually active teenagers on New Year’s Eve. GRADE: B-

Howdy! This is kind of off topic but I need some advice from an established blog.
Is it difficult to set up your own blog? I'm not very techincal but I can figure things out pretty quick.
I'm thinking about setting up my own but
I'm not sure where to start. Do you have any
points or suggestions? Appreciate it

If you enjoyed these movies, or in case you want to improve the list, don't hesitate to leave a comment. watch film-noir Movies Online