The Talented Ms. Dench: The Dame and Cate Blanchett Share a Dirty Little Secret in “Notes on a Scandal” 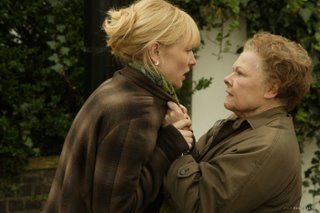 It’s highly unlikely that Dame Judi Dench will be nominated for an Oscar for her supporting work in the recent 007 revival “Casino Royale.” However, when it comes her brilliant portrayal of withered spinster/teacher Barbara Covett in “Notes on a Scandal” she’s practically a deadlock for a nod. She creates a character who is darkly mysterious and pathetic and forces you to instantly connect with this wickedly wretched old woman. She is a lonely, frumpy teacher at a British private school who all the students fear and the other teachers basically avoid. The only one she has in the world is her cat. Enter Sheba Hart (Cate Blanchett) who first makes the mistake of befriending Barbara and secondly begins an unlawful affair with a fifteen-year-old student.

Barbara quickly spins a web of deceit and blackmail once she learns of Sheba’s illicit act. However, although Barbara is pitiful she’s not stupid. She confronts Sheba and confides that she’ll keep hush, hush about Sheba’s affair. Barbara instantly realizes that she could “gain everything by doing nothing.” And from then on the audience is on the edge of his or her seat waiting to see what demand Barbara will come up with next.

The film moves like a Hitchcock thriller, by mainly focusing tension-fill situation that the characters find themselves in. Dench is mesmerizing as Barbara most because director Richard Eyre (who previously directed Dench in the Oscar-nominated “Iris”) let’s us see the film through her eyes. We instantly sympathize with the bad guy much in the same way director Anthony Minghella forced us to identify with Tom Ripley in the similarly structured “The Talented Mr. Ripley.” While “Notes on a Scandal” is definitely more of a psychological thriller (there are no dead bodies or blood splattering to be found here) it instantly takes a hold of you and doesn’t let go.

Kudos goes to Blanchett for helping create (but let’s not forget talented screenwriter Patrick Marber) a similarly lonely and pitiful character. We want to like her but she does start the affair with Andrew (Steven Connolly, channeling a young Colin Farrell with a similarly hard-to-understand brogue), which is not something easy to sympathize with. Sheba is married to Richard (Bill Nighy) and has two children, one of whom has from Down’s syndrome. Like Kate Winslet’s character in “Little Children,” although Sheba is married, she hungers for something different than her traditional lifestyle. Sleeping with a 15-year-old boy isn’t necessarily the best answer, but she does it and we’re supposed to go with it.

And again Philip Glass provides a haunting score. Glass is the type of composer who you either love or hate because of his repetitive driving harmonies, but it helps drive the story forward. And it's catchy as ever.

“Notes on a Scandal” is a powerful and dark psychological drama with award worthy performances. If you’re a fan of the Dame then check out her latest acting gig because you certainly haven’t seen her like this before. GRADE: A-

Magnificent goods from you, man. I've understand your stuff previous to and you're just extremely
excellent. I really like what you have acquired here,
really like what you are stating and the way in which you say it.
You make it enjoyable and you still care for to keep it wise.
I cant wait to read much more from you. This
is really a wonderful website.

Here is my homepage; Inverter Fuji

So, it is possible to easily find best viewed or best-graded movies readily available on the website. Click here to find more about link.


There are lots of websites a which may be used through any of your devices like Android, PC or iOS find here.

You have to register before you're in a position to find any movie on VUDU. Watch Full ReBoot Free - Sockshare - Sockshare.date