American Spy: “The Good Shepherd” is a Film About Foreign Intelligence and Intrigue That’s Neither Intelligent Nor Intriguing 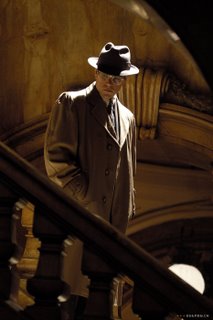 If there were an Oscar category for Biggest Waste of Talent “The Good Shepherd” would win hands down. It kind of boggles my mind that so many great actors and filmmakers have come together to produce something that’s just kinda sorta alright. Robert De Niro is directing! Academy Award winners Matt Damon, Angelina Jolie and William Hut star! The writer of “Forrest Gump” and “Munich” has written the screenplay! And one of the industry’s great DPs, Robert Richardson, has captured it all on film! So where did everything go wrong? Okay, it’s not as if The Good Shepherd is a bad movie. It’s not like having to sit through “Lady in the Water” or “Gigli,” but it has the potential to be “The Godfather of CIA movies” and in that department it comes up a severed horse head short.

The biggest problem isn’t that the film isn’t technically well made, it’s that it’s really difficult to care about anything that’s going on. De Niro, in his second turn behind the camera, has managed to take a subject that should be fascinating and makes it completely unappealing. The film opens with the film’s most fascinating mystery: a grainy video of a couple doin’ it. Immediately I want to know who these people are and what does it matter? We’re then introduced to Damon’s character Edward Wilson. During his Yale years, he’s recruited into the Skull & Bones secret society, which is moderately interesting. Then he’s enlisted to help start a team of secretive operatives investigating God knows what. I didn’t really care and you probably won’t either.

This film is supposed to be about the “birth” of the CIA, but when exactly that happens in the film is beyond me. The film meanders for 2 hours and 40 minutes of uninteresting conversations. Wilson begins wooing a deaf girl, played by Tammy Blanchard, who doesn’t give nearly as good a performance as Rinko Kikuchi in “Babel.” But of course, Wilson is flawed and he then sleeps with Clover (Angelina Jolie) and knocks her up. They begin a marriage that hardly qualifies because he’s away doing boring secret spy stuff. She’s always mad at him because she insists, “I don't know what you do! You leave at five, you're home at ten, seven days a week! I live with a ghost! I don't know anything about you!” Perhaps their marriage is on the fritz because their dialogue is so melodramatic.

There is other supporting work from people we’d like to see more of. Joe Pesci turns up in one scene, playing an older version of his “My Cousin Vinny” role, complete with Mona Lisa Vito sound-alike wife. De Niro appears in a few scenes as wheel chair bound General Bill Sullivan who first tells Edward of his mission to start a foreign intelligence agency. Even Alec Baldwin, hot off of “The Departed” shows up. And wouldn’t you know Billy Crudup pushes the art of acting with a fancy British brogue. And frankly, and I may be spoiling something for you here, the best part of the film is when a certain supporting character gets thrown from an airplane mid-flight.

“The Good Shepherd” could easily have become a great film had it been more interesting. But the film meanders from scene to scene with boring dialogue and literally zero suspense. It’s really more of a film to admire than to really thoroughly enjoy, while “The Godfather” is both a movie to admire and enjoy. It’s really not anyone's fault in particular, but I guess the story of the birth of the CIA just isn’t exactly the story of the century. Some secrets are better left untold. GRADE: C

Normally I do not read post on blogs, but I wish to say that this write-up
very forced me to check out and do it! Your writing style
has been surprised me. Thank you, quite nice article.