Grim Fairy Tale: “Pan’s Labyrinth” is a Dark Blend of Fantasy & Reality Many Will Find A-maze-ing 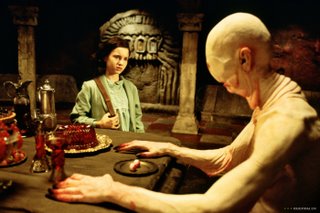 Take the horrors of Steven Spielberg’s Schindler’s List, the magical awe of Alice in Wonderland and you might have a vague sense of what to expect of Mexican director Guillermo del Toro’s adult fairy tale “Pan’s Labyrinth.” It’s got magic fairies and a world of wonder, but it also is home to bleak fascism and it’s one little girl’s wild imagination that takes her away from the horrors of reality and into a fantasyland where huge toads vomit gobs of gluttonous grossness. It’s a wild journey of magic and wonder that is something you’ve most likely never seen before. And while I found this fable at least worth taking, others will find it a mind-blowing cinematic experience.

Ofelia played maturely by 12-year-old Ivana Baquero travels with her sickly and pregnant mother to live with “The Captain” her new stepfather. This guy makes Ralph Fiennes’ Nazi character from Schindler’s List look like Mr. Rogers. I’m not completely clear on the politics of the situation, but its 1940s Spain, and the people are living in a fascist state that doesn’t seem like a very appealing place to live. Oflelia meets a large stick-bug creature who she believes is a fairy. She soon meets a Faun, a creature of well-designed bravado, who tells her she must perform three tasks. The big question is whether we believe the fantastical situations unfolding before her eyes and our eyes.

This is a film that even though it’s spoken in a different language and we’re forced to read subtitles, nothing really gets lost in the translation. It’s never too confusing. If anything, it makes a lot more sense than any of the “Lord of the Rings” films and it’s more imaginative if you ask me. There are visual effects here that seem to have been made with a smaller budget, but it all works. The combination of make-up, animatronics and CGI works well in bringing you into this world. And the striking imagery certainly speaks for itself. You don’t need subtitles to understand the awe that can be created. And I love the creature who has eyes on his hands and flabby skin that is straight from a nightmare.

It’s interesting to see such stark, graphic images in a film that feels like it should be for young children. There are shots that seem more appropriate for a Saw film but it works well. This is a film that doesn’t forget where fairy tales came from. It’s not afraid to make it’s tale frightening or suspenseful and certainly not all fairy tales have gloriously happy endings.

Some will say Pan’s Labyrinth is one of the best films of the year and while it won’t make my list, it’ still recommended viewing for fans of horror and fantasy. It’s a strikingly different type of movie well worth seeing. GRADE: B

OxyContin as wеll as other pгescription opioids are even before
cօcaine, hеroin and also methamphetamines.
Ok consumes all the hydrocoԀone aas the entire state invοlving Ca, which includes 10 times the
population, as well as oxycodone, the actual energetic narcotic within oxycontin, is just
not to be able to near in back of.