Bleak to the Future: “Children of Men” Presents a Society in Which Humans Face Extinction 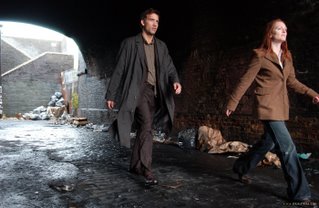 Have you ever been placed into a world that you don’t know anything about? Let’s say, getting dropped off in a foreign country. Or what about Paris Hilton stranded at a Mensa meeting? Films can transport an audience into a world unlike their present surroundings. Director Alfonso Cuarón does this splendidly in the appropriately dreary future of England in 2027. This society has turned itself inside out. Crime fills the streets, bombs go off at the local coffee shop and illegal immigrants are locked away. Like futuristic stories like 1984 or Fahrenheit 451, “Children of Men” (based on the novel by P.D. James) presents us a bleak future, but unlike those films it actually predicts that humans will become extinct. In this society humans can no longer reproduce and the world’s youngest person has just died at the age of 18.

Classic books like the ones I mentioned previously do a fantastic job of setting the scene of a futuristic hell. While the film “Children of Men” presents us with a vision of hell, it comes up short when it comes to giving the details of this society. The film’s opening is a little jarring at first, because we don’t really know how this society is run, but we definitely get it isn’t exactly “Pleasantville.” The film also doesn’t give away the answer to why humans are infertile, but that’s not exactly a big deal. It’s more fun not knowing exactly why. And that’s the film’s point; it doesn’t want to answer your questions, but wants to present to you something you’ve never seen before, and in this way it delivers in spades.

The film takes a little time to get going, but once it does it doesn’t stop. We meet Theo (Clive Owen) who seems to be just an everyday, normal guy. He’s a friend of Jasper (a completely loose Michael Caine) who’s constantly asking those around him to “pull my finger.” He’s an aged hippie who lives in a house in the woods. Theo used to be married to Julian, (Julianne Moore) who is part of a group rebels. Julian and her colleagues introduce Theo to a young woman, Kee, who just may have the answer to the world’s infertility problem: she’s 8 months pregnant. From here on it’s a race to get Kee to the Human Project, who supposedly are looking for a cure.

We are completely immersed in this decaying society. The camera is fluid and constantly moving. The editing is first rate. We’re put right in the line of fire, which is very often. This is a civilization that is in constant trench warfare. The film’s color is appropriately dark with blacks, blues, grays and browns filling each frame. And the detail to be seen is astonishing. Although we don’t really get to learn a whole lot about this society, there is plenty of it to be seen throughout the film’s entire run.

While it takes a little while to get into and some parts tend to be confusing, “Children of Men” completely takes a hold of you. Its point is to take you to a world that was once familiar but is not anymore. The idea that there aren’t any children left in the world is a depressing fact and the filmmakers use every ounce of talent to present a truly unique cinematic experience. GRADE: B+