The Mourn Identity: “The Queen” is a Royal Achievement in Which Politics and Tradition Butt Heads 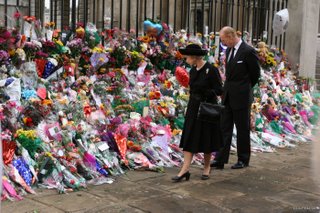 You certainly have to give credit where credit is due. Screenwriter Peter Morgan had the cajones to write a film that questions the Royal Family’s behavior after Princess Diana’s death. Okay, okay it’s not as if he’s suggesting the Royals should be kicked off of their pompous high horses, but it’s fascinating to witness a film in which Queen Elizabeth II can be portrayed as a royal pain in the butt, yet 100 percent likable. This is a role that could have easily turned into a Wicked Witch of the West type, but seasoned Brit Helen Mirren creates an aura of such sophistication and complexity that you’re simply drawn to her hook, line and sinker.

“The Queen” begins with newly elected Prime Minister Tony Blair (an altogether pleasant Michael Sheen) meeting the Royal monarch herself Elizabeth II for the first time. Only several months later Princess Diana is tragically killed in a car crash. The film sets up this conflict: is the death of the former princess a public matter or a private family matter, insisted by the Queen? Blair’s speechwriter insists Diana was “the people’s princess” and even though she wasn’t technically a real member of the Royal family she certainly was a respected and loved human being.

Of course Elizabeth in her traditional, stubborn ways insists the funeral should be a private matter and handled accordingly. But the public’s immediate grief and outcry begins a battle between the Queen and Blair. Elizabeth insists that the public’s mourning is nonsense, because after all it’s not as if they knew Diana at all. And inside her palace she sits, refusing to make a statement or even acknowledges the hundreds of people mourning the loss of their princess.

This is a film with top notch acting and writing. Every line is delivered with power, sincerity, emotion or wit. Mirren simply commands the screen, but she doesn’t pretentiously steal the show. She knows there are plenty of good actors around her (particularly James Cromwell as Prince Philip, Helen McCrory as Blair’s wife and Sylvia Syms as the Queen Mother) and she doesn’t pull the rug out from under her costars. Morgan’s script is dramatic without being overly so and it has a surprising amount of humor that never undermines the drama. The actors who are playing real life people never turn their roles into flashy impersonations, but rather create wholly realistic people.

Director Steven Frears gets tremendous performances from his cast and has to be commended for assembling a terrific film. He uses stock footage of Diana and integrates it seamlessly. Diana’s presence comes alive in the film.

“The Queen” is a fascinating character study that is outstanding from beginning to end. It’s a film that gives us a peek behind the palace doors. What exactly was Elizabeth up to the week following Diana’s death? Mirren is a strong lead and her costars are tremendous as well. This is a film that is completely enjoyable and will spark fun debates afterwards. GRADE: A-

Director Steven Frears gets tremendous performances from his cast and has to be commended for assembling a terrific film. He uses stock footage of Diana and integrates it seamlessly. Diana’s presence comes alive in the film.
king size bedspreads on sale
king bedspreads not comforters