On Golden Bond: “Casino Royale” is an Ace Short of a Full House 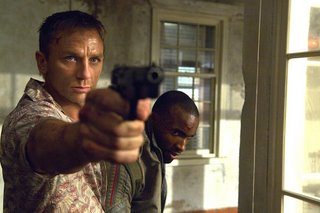 My James Bond knowledge is limited to what I’ve seen in the Austin powers trilogy. During the outstanding and exhilarating opening sequence in which Mr. Bond follows a suspect by foot up a construction site, I wanted to shout “Juno chop” whenever he punched the bad guy. I don’t really count what I’ve seen in bits & pieces of the sometimes unavoidable 007 marathons on cable TV. Of course there had to be something about the super secret agent that has caused him to spawn films for nearly four decades. And that something finally came with the latest installment “Casino Royale” in which Munich co-star Daniel Craig donned the black tux and shaken martini. This is a film that will be overwhelmingly pleasing to Bond fans and a modicum of entertainment for Bond virgins.

Seeing as though I don’t know too much about the Bond franchise, “Royale” is more like The Bourne Identity than Dr. No but critics are certainly happy with it. I found most of it exciting (the first half) but the rest seemed to creep along at a snail’s pace. Director Martin Campbell who directed GoldenEye starring Pierce Brosnan as Bond, does an equal job of creating excitement in breathless action sequences and scenes in which the character sit down to a game of extremely high stakes poker (we’re talkin’ millions here). I’ve never found poker extremely fun to play let along watch so I have to give credit to Campbell. He must have spent his nights watching Ultimate Poker Challenge or something.

I’m not so sure what the plot of this renovated Bond flick is but from what I hear this is supposed to be a prequel of sorts. Bond has just been granted with 007 status and the person in charge is none other than Dame Judi Dench herself. (Oscar worthy you ask? You never know with the Dame) He tends to be a rather pesky pain in the butt for her and the audience gets to laugh at his annoying antics (he breaks into her house and is sitting on her couch when she arrives home, he calls her in the middle of the night). Bond travels all over from Madagascar, without the talking animals, to Europe to the Bahamas and Miami. The bad guy is Le Chiffre (Mads Mikkelsen) who tears blood. The “Bond girl” is Vesper Lynd (Eva Green) who Bond names his trademark drink after.

I knew the action was flagging with the film took a strange turn. Towards the end of the film our hero is captured, stripped and tortured ala “Hostel.” While it’s not graphic at all, it seems a rather odd development. I’m not sure of 007 films’ naked torture record. I would say the film runs about 25 minutes too long but the first half is extremely strong and fun.

Bond fans are probably going to rejoice with this reinvigorated action flick. Apparently the last installment was God-awful, (Denise Richards as a scientist?) but I’m sure this is the way Bond was meant to enter the 21st century. While many are balking at Craig’s blonde hair and baby blues, that hardly seems like a worthy complaint. If anything, I wish editor Stuart Baird had convinced the director to cut this Bond down a bit. GRADE: B

Ideal to be worn both as an office- and a leisurewear, the replica watches sale is not the sort that needs to be babied and brought out only on special occasions; it is the kind that replica watches keeps you confident even when you want to sport a classic style amidst remaining busy and active. It is comparatively lower on battery breitling replica sale consumption, with large intervals between the battery-replacement schedules. This fake rolex sale indicates a new outlook that gets into the existing mix and creates a classically-styled sports rolex replica sale that does what it is best at. A watch that fits the purpose with replica watches sale its particular design-DNA despite being an entry-level option, it is enough to keep even the mechanical purists turning up their noses at it.