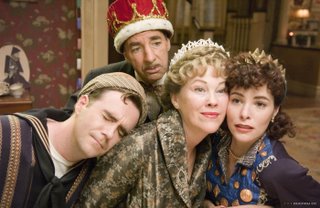 I want to criticize “For Your Consideration” right away to get it out of my system. The film as a whole was a slight disappointment. Perhaps it’s because Christopher Guest and his genius troupe of extremely gifted actors’ high point was way back in 2000 with "Best in Show." That film expertly skewed those nutty dog show contestants, created an air of excitement and suspense, and gave us extremely appealing characters that all had hilarious chances to shine. For Your Consideration should work simply by default. When you assemble the same funny actors in a story that is entertaining it should just work. Sometimes it does, sometimes it doesn’t. There were large chunks of the film in which I just didn’t laugh. And that was disappointing. However, this is a movie that is really hard to dislike despite its faults.

Now that it’s out of my system let’s talk about the film’s positives. The actors are very funny people, and when the film focuses on the funny storylines it’s a success. The film revolves around the production of the independent film Home For Purim. Catherine O’Hara, Parker Posey, Harry Shearer, Rachael Harris and Christopher Moynihan are the actors playing actors in the film within the film. Christopher Guest is the director. Eugene Levy (co-scripter with Guest) is an agent. Jennifer Coolidge is a producer. Ed Begley Jr. is the flaming make-up artist. John Michael Higgins is a publicist. Bob Balaban and Michael McKean are the screenwriters. Michael Hitchcock and Don Lake are co-hosts of an Ebert & Roeper-like film critic show. And finally Jane Lynch and Fred Willard are at their best as co-hosts of an Entertainment Tonight-like entertainment news show. During the filming of the film within a film, someone mentions O’Hara’s name with an Oscar and there you have the simple flame that starts the fire that is Academy Awards buzz.

What’s interesting about the film is how bad Home For Purim really is. From what we see of the shooting, there’s no way that any of the actors would ever be nominated in real life. And that’s the film’s point. That awards really mean nothing. Sure there are plenty of filmmakers and actors out there worthy of praise, yet there are just as many who aren’t. Just the simple excitement that such a crappy film could be considered in the Oscar nomination race is enough to send shockwaves through the film’s cast. I less time was spent on the filming of Home For Purim, and more time on the actual building of buzz. Some of the scenes of Purim are so bad they’re tedious because like I said its film that would never win awards. All of the actors are uniformly excellent except they all don’t have the juicy roles that they all had in Best in Show. The film does create excitement leading up to the nominations.

Of particular interest here is Catherine O’Hara would is actually so good that she deserves a nomination. Seriously. She is funny as always, but she adds just a bit more that makes her role not only humorous but also actually quite affecting. Her character’s transformation from simpleton thespian to… well I don’t want to spoil it… is just simple exquisite and delightful. Wouldn’t it be the film’s ultimate irony is she scored a nom? She’s definitely worthy and under appreciated actress. This is her best performance.

While For Your Consideration isn’t Guest’s crowning achievement, it is a fun and lighthearted ode to movie making. While it’s not in the “mockumentary” form as his previous efforts, the narrative flows evenly enough to keep the viewer intrigued for the most part. While the actors themselves are funny, I couldn’t help but wish they’d all grab a pooch and go all dog show nutty for me. GRADE: B

Hi all. How are you?

You have made some good points there. I checked on the internet to
learn more about the issue and found most individuals will go along
with your views on this web site.

Stop by my web page; Diet Plan For Fat Burn

I found your site very beautiful and distinguished too. Thank you for your good work and continue.