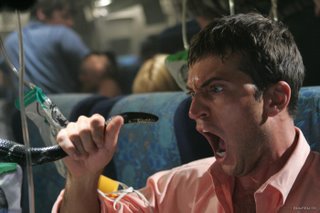 If you recall my review of “Little Miss Sunshine” from last week, you’ll remember that I mentioned, “There simply isn’t a more entertaining time at the movies. All with your brain in full functioning mode.” Well if you’re desiring a movie just as entertaining, but without the need of a brain “Snakes on the Plane” delivers the corny goods. This is the 70s-esque disaster epic Irwin Allen would of come back from the grave to make. May he rest in peace in that swarm-filled upsidedown towering inferno in the sky. “Snakes on a Plane,” the film that became an internet phenomenon nearly a year before it’s theatrical release, is a combination of so bad it’s good movie and cheesey entertainment thriller. This is a movie that almost seems like more of a tribute to the mock-filled spoof “Airplane!” than to the wonderfully horrible diaster flicks that inspired it. This is a film filled with lines of dialouge destined to become classic and moments guaranteed to make you glad you paid for your admission. Turn you’re brain off and enjoy the fun.

Do I really need to explain the plot to you? The title obviously says it all. It’s about snakes on a plane. (A mob boss releases the snakes midflight to kill a witness, you’d think a gun shot would do the trick, but alas there’s be no movie!) And the picture nearly isn’t as disasterious a motion picture as you’d think it would be. Yes it’s corny, cliched and over the top. But at the same time there’s an almost underlying homage to everything we love about going to the movies. The movie KNOWS that we go to the movies to have an experience. Its sole purpose is to entertain, to take you into a world where you completely believe that a terror filled airpline ride filled with venoumous, slithering reptiles could actually happen. “Snakes on a Plane” is pure mindless entertainment and we’re all the better for it. But it accomplishes something no other film in history has. It has become a midnight cult film before anyone had ever even seen it.

I was lucky enough to catch a latenight showing of the trashy cult favorite “Showgirls.” I was amazed at the response the audience had: reciting lines of dialouge, shouting out at the screen, and appluading and laughing at all the precise moments. I found nearly the same reaction during opening night of “Snakes on a Plane.” It’s as if everyone had already seen it and remembered every horrible line of dialouge that ranged from “OK let’s go get these people their air” and the now infamous Samuel L. Jackson quip “I’ve had it with these mother%#$&*!@ snakes on this mother%#$&*!@ plane!” “Snakes on a Plane” isn’t just a movie, it’s an experience. And the audience isn’t the only one who knows it. The cast does a great job at acknowledging that they’re in a movie called “Snakes on a Plane.” We get to have just as much fun as they do. And no one has more fun than ER vet Julianna Margulies wielding an axe.

However, beneath the cult following and the “audience participation” which started way back with “The Rocky Horror Picture Show,” there is still a fun, kind of shocking and at times grotesque movie (there are plenty of actual jump scares and disgusting make-up jobs) that is just a barrel of fun. Yes there are parts that are too easy to make fun of and there are so many things we’ve seen countless times before, but it all works completely in its favor. A question remains as to whether the film would be as popular had it not been for its title. Perhaps, but the film would still be the same whether it was called “Snakes on a Plane” or the boring “Pacific Flight 121.”

When a film has the courage to both acknowledge it’s cheesiness and offer you seconds as well, that is a true motion picture experience. This is a film that you not only watch but you live it. Perhaps nothing like this will occur again and my guess is there won’t be a “More Snakes on a Plane” but if there is, I’ll be the first in line, with a rubber snake around my neck. GRADE: A-
Posted by Chris at 12:07 AM

I'm with you up till this sentence: "Its sole purpose is to entertain, to take you into a world where you completely believe that a terror filled airpline ride filled with venoumous, slithering reptiles could actually happen."

This movie was never meant to be taken seriously and I never took it as such. At no point in this movie did I think I wasn't watching a movie nor had I forgotten the title was "Snakes on a Plane". I couldn't believe what I was watching let alone believe I had been taken to a world where something like this could actually happen. Seems like you're taking this a bit to far Mr. Gallo. But maybe it's just me.

I thought of a good analogy for your statement: "South Park takes you to a world where you actually believe David Blaine could swallow his own head." Or maybe not.

What's Happening i am new to this, I stumbled upon this I've found It positively helpful and it has helped me
out loads. I hope to give a contribution & aid different users like its helped me.
Great job.