We Can Be Heroes: Oliver Stone’s “World Trade Center” is a Worthy Cinematic Memorial 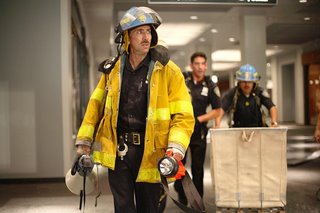 Oliver Stone’s new movie is respectful of everyone involved in the terrible events of 9/11. His film reflects a mournful time in America’s history, but instead of relying on shocking, disturbing images (however there’s still plenty to be disturbed by in the film) in recounting that day, he instead shows a strong sense of hope, camaraderie and heroism that was also present that day. Yes that day was filled with evil but there was plenty of hope and light at the end of the tunnel. The film takes an apolitical and uncontroversial look at the events of that day from the point of view of two real life Port Authority police officers who went into the World Trade Center that day and got caught in the rubble of the destroyed buildings. This is their story.

Stone is no stranger to controversy (see Platoon, JFK or Natural Born Killers etc) yet this time it’s not really him who is controversial; it’s the subject matter. Anyone who has the guts to make a Hollywood fiction film about September 11 is stepping into automatic controversial mode. Many questions arise. Is it too soon? Do we need a movie about 9/11? Is it disrespectful to turn a tragedy into entertainment? Why should I want to relive that day? The last question raises an interesting point. We tell each other and ourselves that we should never forget what happened. A film is the best way to show that there’s no way to ever forget the lives that were lost and the destruction that occurred. Stone’s film is, while not revelatory or as viscerally emotional as the last 9/11 film “United 93,” a very well made Hollywood story about two men who wanted to help in a crisis. It has, for a filmmaker who many consider extremely liberal, a very pro-American message about courage and survival.

One thing you’ll notice in Stone’ film, as opposed to “United 93” is the use of stars in some of the lead roles. Nicolas Cage does a commendable job of portraying Police Officer John McLoughlin. Also very good is Michael Pena, who was fantastic in last year’s Oscar-winning “Crash” as Officer Will Jimeno. I was mostly impressed with the emotional turn by Maggie Gyllenhaal, who I feel is always fine, but nothing too special. Here she brings a strong emotional weight to her role as Will’s pregnant wife. I thought she certainly stood up Maria Bello, who gave a more understated but still affective performance as John’s wife. These women probably had the hardest job to do, because they had to act like grieve stricken women without going into overboard Lifetime movie mode (a line which the film almost seemed ready to cross). However, there is one truly effective scene in which Bello conforts a total stranger, waiting to hear news about her missing son.

This is the type of film that could have easily been made into a made-for-TV movie (which I’m sure would attract a larger audience at home. It amazes me that people forget when they watch a movie on TV, even though they’re not paying for it, the networks are still working for a profit, but I digress). Stone’s film is actually filled with a surprising amount of stark colors. The scenes in which the officers’ families impatiently await news of their condition are very striking shot by DP Seamus McGarvey. These are highly contrasted to the scenes of Cage and Pena down in the dark, crumbled bowels of the building. There are also plenty of obligatory flashbacks that you typically find in conventional movies, but these scenes do affectively give more insight into these people. They are just ordinary people. And the more you realize how ordinary they are the more you realize how many ordinary people gave their lives on what should have been just any other day.

Stone succeeds in making a poignant, well-made 9/11 movie without the controversial baggage his films usually carry. In a way this works for him because he makes a more effective and respectful film in that manner. I’m sure we’ll have to wait awhile longer before anyone delves into conspiracy theory mode involving 9/11. Until that day comes, if you’re willing, Oliver Stone’s “World Trade Center” is a moving, well-made conventionally structured film that not only mourns those who lost their lives, but honors those who were able to survive. You’ll leave the theater with a subtle feeling of hope that in these dark post-9/11 days perhaps humanity can truly prevail. GRADE: B+
Posted by Chris at 9:55 PM

I don't know if it's just me or if perhaps everyone else encountering problems with your
site. It appears as if some of the written text in your posts are running off the screen.
Can somebody else please provide feedback and let me know if this is happening to them as well?

This could be a issue with my internet browser because
I've had this happen previously. Many thanks

Here is my web-site ... Motorcycle accident in Florida