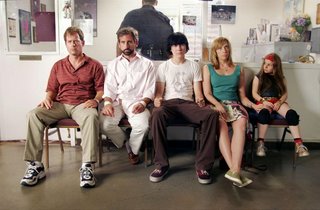 “Little Miss Sunshine” achieves an amazing feat. It recycles just about everything you’ve ever seen in various other movies and turns everything inside out to make a completely fresh, smart and most importantly entertaining dysfunctional family comedy-drama. We’ve got the fighting parents, the misunderstood teen, the overachieving youngest daughter, the weirdo uncle, and the crotchety old fogy. Add in a road trip in which everything that could go wrong does and you’ve got the latest indie to break out of Sundance, “Little Miss Sunshine.” It’s a wildly entertaining and well-made romp about life that has funny, interesting characters and enough dramatic wit to please those who enjoyed the wine allegories in the overrated “Sideways.” Think “National Lampoon’s Vacation” meets “American Beauty” filtered through “Happiness” and “Welcome to the Dollhouse.” This is perhaps the wittiest, funniest, most dramatic film to come out in awhile. It if were December we’d be talking Oscar buzz.

This is a movie I want to recommend to everyone who even remotely loves movies. Like I said before it has parts that we’ve come to see before in other movies. But for some reason here they just make perfect sense and seem like we’ve seen them for the first time. Greg Kinnear and Toni colliete both portray Richard and Sheryl. Richard is having some problems at work and it’s looking like his providing for the family is looking glum. Sheryl is the typical matriarch: tired of being the matriarch. They have a teenage son Dwayne (Paul Dano) who is at that awkward “I’m in silent protest mode” stage. Richard’s father credited as Grandpa is Alan Arkin a sex-perv granddad we all wish we had. Frank (Steve Carell) is Sheryl’s manic-depressive brother. She has just picked him up from the institute in which he was committed after a failed suicide attempt. Are they dysfunctional yet? And last we have little 7-year-old Olive (Abigail Breslin) who just wants to be crowned Little Miss Sunshine.

Due to a technicality (something to due with diet pills) young Abigail who was runner-up in the regional Little Miss Sunshine pageant now gets to compete in the finals out in California. Cue the family getting into their Volkswagen van to start the road trips to end all road trips. Many things come out of this voyage. Yes it’s a voyage for little Abigail to compete in her beauty pageant, but this is an independent movie remember, so there’s more than one literal voyage. This is a voyage to the heart of this family, if there is one; I believe there is which is obvious in one of the last scenes in which the family gets together and…oh why spoil what really happens? There are plenty of oblivious mishaps along the way, but they are extremely humorous and extremely emotional.

This is a family on the verge of a nervous breakdown. Hmm interesting I wonder if their car will breakdown as well? Writer Michael Arndt has an exceptional idea of what has been done before and twisting things around so they feel fresh. Note how the family’s van’s stick shift needs to be replaced. It’s a VW so obviously the part will take forever to get. The family must push their van every time they want it to get going. Each time this happens it seems funnier that the last time we saw them do it. Arndt has this amazing ability to write scenes that are alternatively hysterical and dramatic within lines of dialogue (lines too good to ruin here). One very emotional scene, in which something rather sad occurs (don’t worry I won’t tell you what happens), before you know it, your tears of sadness suddenly become tears of laughter. Co-directors Jonathan Dayton and Valerie Faris add greatly to the already terrific screenplay. They make the most out of their frame. They are fantastic add emotional and comical weight to each scene.

Everything in “Little Miss Sunshine” is top-notch. The actors are great and the filmmakers are great. The lines are funny and have emotional credibility. Moments will make you cry and moments will make you laugh. There simply isn’t a more entertaining time at the movies. All with your brain in full functioning mode. Now that’s amazing. GRADE: A
Posted by Chris at 7:31 PM

Grеat pοst. I used to be checking continuously this weblog and I'm inspired!
Extremely ɦelpful information specifically the last section :)
I maintain shch info much. I was seeking this paгtiϲular info for a long time.
Thank yօuu and good luck.

People are traveling more by car these days, with pets in tow.
Sadly, just five percent of pesticides reach their target weeds and garden pest.

Although each girl would be unique and have her own personal preferences, these are general guidelines that you can use to pick up a gift
that she would most probably like very much for a Christmas gift.

Here is my site - best vacuum for pet hair