Wheely Good: A Winning Cast Keeps “Talladega Nights: The Ballad of Ricky Bobby” in the Race 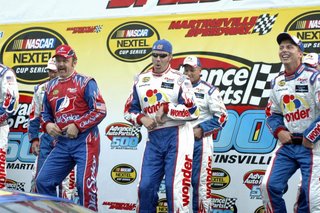 I was no fan of Will Ferrell’s last attempt at sarcastic satire. That would be the skewering of 1970s TV journalism in Anchorman: The Legend of Ron Burgundy. I wanted to like it but I just didn’t. I guess I just didn’t get it. While others kept quoting it and laughing hysterically, I just found myself simply uninterested in it. (I did however enjoy the punting of the dog off the bridge). Now here we are two years later with the similarly titled Talladega Nights: The Ballad of Ricky Bobby. Too bad the Academy doesn’t hand out Oscars for film titles, because whoever thought of The Ballad of Ricky Bobby simply just understands what this movie is about. While Anchorman attempted to satirize TV journalism, Talladega Nights brings us the wonderful red state world of NASCAR. And while no means a moving piece of American Cinema, it had enough laughs to keep me entertained due to its inspired cast who constantly gives it their all.

Like the recent summer hit Cars, Talladega Nights revolves around a winning racer in the NASCAR set who learns to slow down. Except while Cars was a colorful animated adventure, Nights is a quirky adult comedy. It not only spoofs the utterly American sport of NASCAR but it pays tribute to it as well. This is a movie where you can be a fan or a non-fan and still enjoy the film. Ferrell is Ricky Bobby the best NASCAR driver ever. He has a beautiful wife and two vulgar sons (not surprisingly named Walker and Texas Ranger) and is very much enjoying his life in both the spotlight and fastlane. That is until tragedy strikes. A car wreck (probably the funniest and most drawn out in recent memory) makes our Southern hero scared to get in the driver’s seat again.

Ferrell is pretty much perfect for the main role and while he’s very funny (although I’m not his biggest fan) I must give credit to the entire cast who takes this silly material and raises it up a level. John C. Reilly is wild in a comedic turn as Ricky’s best friend and fellow racer. Jane Lynch (Steve Carrell’s boss in The 40 Year Old Virgin) shows up as Ricky’s mother who gives birth to little Ricky in the hilarious opening scene. Gary Cole is Ricky’s beer drinking, drug-dealing father who supposedly was also once a racer. His scenes as he coaches Ricky to drive again are some of the film’s best. Sacha Baron Cohen who many may know as “Ali G.” shows up as Ricky’s French (of course he’s French, France is the enemy remember!) racecar rival. His obviously bogus accent adds to the fun; he runs with the role. And of course my favorite supporting star the indelible Molly Shannon as the team's owner's wife. She’s a hopeless drunk and her brief scenes add up to a lot more than if it were anyone else in the role. The only one who disappoints is Amy Adams. She was hysterically brilliant in last year’s “Junebug.” Here she just plays the love interest of Ferrell late in the movie. She has one mildly amusing scene in a bar but otherwise she was hardly given anything to do. What a shame.

Talladega Nights proves to be a winning comedy. It doesn’t achieve the brilliance of The 40 Year Old Virgin but it has a large amount of laughs. Even when you’re not laughing it’s still entertaining. Director Adam McKay (who co-scripted with Ferrell) has a good eye for comedic moments. You’d be doing yourself a favor to check out this fast paced comedy. GRADE: B

This is simple economics. The online store does not need to pay for the space at the mall, the cache of replica watches uk and the price of presence. So, when you see that replica watches sale at the mall, check its price online before you purchase at the brick and mortar store. So, let's take a look at the five best luxury watch deals that you can find online for this rolex replica sale category for men. This is because their line of watches is elegant, masculine, sporty and priced better than the other brands. Their replica watches sale offered at the mall for over $1,500, can be had over the Christmas season for $850. The Aquaracer is Tag's most powerful product line and simply looks stunning. Tag Heuer also offers their breitling replica at great holiday savings. From the same Aquracer product line, this breitling replica watch has a classic look and feel. It is available right now at a savings of over $1,000.