Monster’s Ball: Be Prepared to Scream Your Lungs Out in “The Descent” 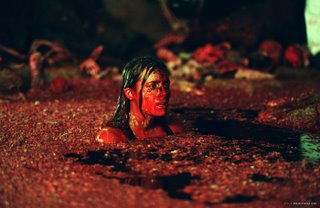 In the tradition of other low budget horror flicks 28 Days Later, The Blair Witch Project and Open Water, Britain’s “The Descent” is a relentless film made simply and utterly to scare the ever loving hell out of you. It works because a) it’s a good movie even without the fright factor and b) it’s one of the best splatter movies of recent memory. Ah, I must declare that I do love the R rating. Just the notion that I had to have my ID checked before entering the theater gave me the satisfaction that I would be in for something either a) extremely frightening or b) exquisitely gory. Boy was I surprised that there was a third option: c) all of the above. All of that with a simple story about monsters in a cave. And they could have called it that: Monsters in a Cave. What does Snakes on a Plane think it is anyways?

The Descent was made by no one you know of and doesn’t star anyone you’ve ever heard of. Please don’t let that scare you off (the film does that all by itself). It actually makes it that much better because to have unknowns instead of seeing stars you know you’ll say “Hey that’s Drew Barrymore. I know she won’t get killed because she’s Drew Barrymore.” (Of course that didn’t really work out for her in “Scream,” but I digress.) Instead you have no idea who is going to bite the dust (or should I say get bitten) in this rollicking good time. The story involves six British women who are thrill seekers. They all take a vacation in the Appalachian Trail in North Carolina. They go inside the mountain and explore the underground terrain. They are simply sensational rock climbers, although one admits, in the film’s funniest line, that she’s “not bloody Tomb Raider.” Then of course all hell breaks loose.

The film immediately makes you feel claustrophobic, due to director Neil Marshall’s expert sense of place. He uses his frame to create suspense. We don’t know what’s just out of the camera’s lens and it frightens us. And he is certainly hell-bent on scaring the crap out of his audience. From the beginning of the film, which includes a wonderfully impressive surprise scare, he let’s us know that he’s not a man to be trusted. And when you can’t trust a horror director, you know you’ve stumbled onto a terrific thriller. Just when you think you’re prepared for the horror, it becomes even more horrific than you could of imagined. He plays with the sense of fear that he started from the beginning and doesn’t let you go until the film ends.

So what’s so scary in these caves anyways? For your benefit I will not say. There’s something (or perhaps some things) living down there that hasn’t been seen before. They are scary and like Steven Spielberg did in “Jaws,” Marshall only hints at them creating unbearable terror. You simply become terrified for these women, who all do amazing jobs at being non-clichéd, strong women who we fear for every time there’s a moment of terror.

If you’re in the mood for a simple, stylish scary ride, The Descent is your ticket. It has people you care about, in an almost unbearably frightening situation. The tension builds and builds and the events that unfold are unlike anything you’ve ever seen. Perhaps the ads are correct, this just may be the scariest thing American audiences have seen since “Alien” was released over twenty-five years ago. GRADE: A-
Posted by Chris at 11:05 PM