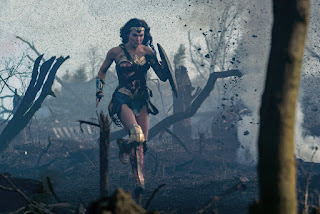 Most people will make a big deal about how “Wonder Woman” is finally a critically successful film in the “DC Extended Universe.” What's more important, however, is that it's just a great film, period. The film won't do much for those suffering from “superhero fatigue” but the fact that it's a fun, female-driven movie, with not only a strong woman in front of the camera but also a strong woman behind it as well. The movie is helmed by Patty Jenkins who directed Charlize Theron to an Oscar win for 2003's “Monster.” “Wonder Woman” is another comic book origin story, something we've seen countless times, but we finally get to see a different point-of-view. It also helps that the story is interesting because the characters are so well-drawn, their motivations make sense, and its World War I setting is a refreshing change of pace from the futuristic style of the current superhero cycle; the film sort of functions like a female-centered cross between “Captain America: The First Avenger” and “Thor.”

Attempting to describe the plot of “Wonder Woman,” which not confusing or overly complicated, will make me sound like a middle-aged woman trying to describe the plot of “The Matrix” so I'll leave it at this. Diana (the perfect Gal Gadot) is an Amazonian, allegedly made of clay and brought to life, who grows up amongst other women an island paradise. She dreams of being a warrior. The island is protected by a magical shield but one day World War I pilot Steve Trevor (Chris Pine) crashes into the realm, she rescues him, and he tells her about the Great War happening all over the world. She insists on leaving with him to help fight, as she sees this to be the work of the evil god Ares who is known to have corrupted all of mankind. The film does go from a great introduction of strong women to a strong woman not used to being in a man's world. And the script has fun playing with gender tropes. It's a fun take on the “fish out of water” trope that has been used a million times. Diana and Steve are fascinating characters and they grow closer as the film progresses.

A superhero film would be nothing without a great villain. “Wonder Woman” doesn't overwhelmingly succeed too much in this arena but that's not necessarily the worst thing. I won't give much away but the true villain isn't really revealed until the final act. We do get Doctor Poison Elena Anaya played by in a creepy partial face mask that makes her look like some female mad scientist version of the Phantom of the Opera. She's got an interesting, distinct look which I enjoyed.

“Wonder Woman” has a visual pallet that is very different from what we're used to in the Marvel universe. It's a little darker and gritter like the other DC films but not so washed out to be severely depressing. In fact it has way more color than either of the previous Superman films. And it thankfully has a lot more humor. The darker tone and humor is balanced nicely. It's no wonder the script is a tad lighter than we're used to in this “universe” since the screenwriter is Allan Heinberg who worked on The OC and Grey's Anatomy among other popular television series. Jenkins who is no stranger to drama and even comedy (she directed an episode of TV's Arrested Development) strikes a great balance. There's emotional beats when needed (I may have even shed a tear by the time the credits rolled) and comic relief when necessary. Sure one of the only other female characters in the “real world” is a secretary but Lucy Davis is a hoot in the role. It really took a woman's touch to make us feel something about these characters.

Too much will be made about comparing Marvel and DC and how DC finally has a “good” movie under its belt. That's trivial stuff. There's good things to find in these DC movies if you're willing to look for them. “Wonder Woman” is great even when not compared to the DC films that came before. It's just as well made as anything coming from Marvel if the comparison is necessary. Kids finally have a tough, cool female hero to look up to. And it only took four films to do it (Three if you count the fact that Diana actually showed up in “Batman v Superman.”) After fifteen films, Marvel has yet to even give us a film with a solo female hero, though they have some pretty kick-ass ladies in there. “Wonder Woman” is the film her fans, and even the rest of us, have been waiting for.  GRADE: A-

whoa this blog is fantastic i love reading your articles. Keep up the great work! You know, lots of people are looking around for this info, you could help them greatly. I appreciate, cause I found just what I was looking for. You’ve ended my four day long hunt! God Bless you man. Have a great day. Bye http://noticiasdealcorcon.com

I’m impressed, I must say. Genuinely rarely should i encounter a blog that’s both educative and entertaining, and let me tell you, you might have hit the nail around the head. Your concept is outstanding; the catch is an element that not enough consumers are speaking intelligently about. I am very happy I always came across this at my seek out something in regards to this.   hadeel web