How I Met Your MUTHUR: “Alien: Covenant” is a Creepy, Contemplative Pre-sequel 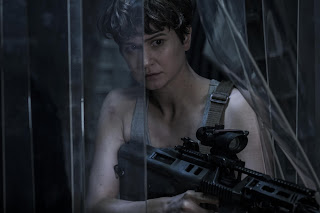 It only took two films, the hotly debated and divisive “Prometheus” (I loved it) and what the Golden Globes called the Best Comedy of the Year “TheMartian,” for Ridley Scott to get back into his sci-fi thriller Xenomorph groove. When “Alien” was released in 1979 it set a new standard for horror and science fiction. So many films have understandably copied its success. The series petered out eventually, entering “Jaws the Revenge” levels of mediocrity. Ridley Scott's “Prometheus” was a return to sci-fi form and a nod to his original filmmaking roots. Some people hated it. Some people loved it. But the best movies are always the ones that are endlessly debated. Enter “Alien: Covenant” a sequel to “Prometheus” that also works as a prequel to “Alien” and helps flesh out the things that seemed to frustrate people the most about the film that came before it. It's a taught, well-made thriller. The film doesn't break the mold and doesn't offer the same shocking moments of its predecessors but it further explores the fascinating themes of creationism and artificial intelligence.

The best sci-fi films always offer a little bit more than cool effects and action. Ridley Scott is a pioneer in the genre but too far too long of a break. “Prometheus” and “The Martian” proved he could be successful in the genre again and “Covenant” is no exception. Taking place several years after the events of “Prometheus” the film follows a small crew of a ship carrying thousands of people, and embryos, sent to colonize a new planet. After the ship is damaged and the crew is forced to wake up from cryosleep early, they discover a signal from a nearby habitable planet, still years away from their destination, they decide to check it out in hopes it could be their new home. But it's never that easy is it? Aboard the ship is Daniels (Katherine Waterston) the wife of the ship's captain, Oram (Billy Crudup) the first mate, pilot Tennessee (Danny McBride), head of security Lope (Demián Bichir), and a handful of others. Every crew member is with their significant other. Also aboard is a familiar face: a synthetic human named Walter who looks exactly like David from “Prometheus.” He's also played by Michael Fassbender in another standout performance. He's an updated model and the film delves extremely deep into these fascinating android characters. To say much more about the plot or whether familiar characters show up is to ruin the fun.

But let's get to the good stuff. One is going to see “Alien: Covenant” for two main reasons, you just really want your “Prometheus” questions answered and you want to see another awesome “Alien” movie. Rejoice because you get both. Screenwriters John Logan and Dante Harper make the most sense out of what “Prometheus” started and have a great script that is heavy on the philosophy but doesn't skimp on the action and suspense. And Scott taking a cue from himself, takes his time here. Anyone waiting to see a Xenomorph onscreen in the first 15 minutes will be sorely disappointed. But the money shots come and they're worth the wait. There is lots of slimy, slithery creature stuff here that I can't give away. I'd say none of it comes close to being as squirm inducing as the “abortion scene” from “Prometheus” or shocking power of the “chestburster scene” from the original “Alien” but there's plenty of good stuff. The computer effects are really well done. The days of practical effects are unfortunately long gone, but what we're given are completely convincing.

“Alien: Covenant” is also a solid achievement as well. Dariusz Wolski's moody and stark cinematography is gorgeous and Jed Kurzel's otherworldly music filled with cues from Jerry Goldsmith's original score is fantastic. Overall, “Covenant” is a resounding success. Waterston is a fine “Ripley stand-in” and is easy to care about, Fassbender gives another fascinating performance, and Ridley finds a great balance of “Prometheus stuff” and “Alien stuff” and bends these worlds together nicely. I would argue that the Alien-inspired “Life” was a much more squirm-inducing experience but “Alien: Covenant” is perfectly fine entertainment considering it's the 8th installment in a franchise that burst onto the scene nearly forty years ago.  GRADE: B+