O Mother, Where Art Thou?: Goldie Hawn Makes Her Return in the Decently Funny “Snatched” 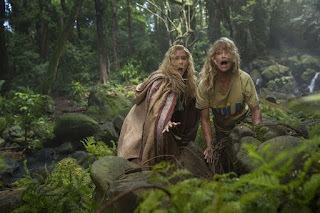 I’m pretty confident that Amy Schumer is the female version of Seth Rogen. He’s known for playing the eternal man-child and Schumer is becoming known as playing the eternal woman-child. She was extraordinary in “Trainwreck” and paired nicely with Judd Apatow’s great sense of humor behind the camera and Bill Hader in front of the camera. Amy’s character in “Snatched” is also a trainwreck of sorts. She just wants to go on exotic vacations and drink with her boyfriend. But he dumps her and she decides to take her mother instead. Enter Goldie Hawn, a celebrity of the highest order who’s career took a nosedive with Warren Beatty back in the early 2000s. “Snatched” is about a mother and daughter who get kidnapped while on vacation in South America. It’s sort of a weird hybrid of “Trainwreck,” “Romancing the Stone,” and “Terms of Endearment,” but not as good. It’s stupid and raunchy and whether you laugh or not will probably depend on how much you like Schumer’s shtick; I enjoyed the film even if it runs out of steam by the end of its 90 minute runtime.

“Snatched” is nothing particularly new and when it comes right down to it it's probably offensive to a lot of people. And I'm not talking about the jokes that refer to Amy Schumer's vagina or anything. I'm talking about the whole “white women in kidnapped in South America” thing. However, you don't go to see anything with Ms. Schumer for politically correct stuff so let's move on. Amy plays Emily Middleton who has already booked and paid for a vacation to Equador with her boyfriend but he breaks up with her within ten minutes of the film opening. To the surprise of no one, she can't find anyone to go with. She goes begrudgingly to visit her lonely, overly worrisome, divorced, cat-loving mother Linda (Hawn). Linda is taking care of her agoraphobic adult son Jeffrey (Ike Barinholtz, usually a scene stealer but not when he's given somewhat mediocre material). Emily sees a bonding opportunity and somehow thinks it's a good idea to drag her nearly 70-year-old , but former adventurous mother to South America (for the record, Hawn is currently 71). They meet two bizarre American tourists played by Wanda Sykes and Joan Cusack. Then Emily meets a handsome local man and before she knows it Linda and Emily are being held captive.

Let's focus on the positives though. Screenwriter Kate Dippold, coming off films like “The Heat” and the controversial-for-no-reason “Ghostbusters” redo, takes very familiar material and makes it somewhat fresh. This script isn't going to win any awards but at least it's not a sequel, remake, or reboot. And there are lots of women in it. And they're funny. Was this the script that was needed to revive Goldie Hawn's career? Not really. But she's still freaking hilarious and it feels great to see her up on that screen again. She hasn't lost anything. She has great chemistry with Schumer and the appearance of Sykes and Cusack in somewhat thankless and somewhat pointless roles are still a highlight. There are better comedies out there and there are far worse ones. Director Jonathan Levine seems to be more interested in broad comedy lately as opposed to the more refined emotion he brought to the likes of "Warm Bodies" and the wonderful "50/50."


I find Amy Schumer's brand of raunchy comedy amusing. And she's actually a good actress. This is still technically a downgrade from the wonderful “Trainwreck” and she's not exactly stretching her legs by any means but she plays this part well. It's fun seeing Goldie and Amy onscreen together and the film has a delightful mean streak and isn't afraid to be un-PC. The film eventually becomes a bit tiresome as it chugs along. But it has it's moments. If seeing Amy Schumer getting caught wiping off her crotch in a bar bathroom is your idea of fun entertainment (hell yeah!) then go see “Snatched.” The title certainly doesn't lie.  GRADE: B
Posted by Chris at 10:58 PM