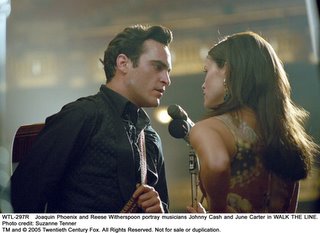 When you venture out to a concert with friends there’s no greater anticipation than waiting for the performer you’ve traveled all the way to see run onto stage and play the tunes you love so much. The film Walk the Line brings all of that anticipation and then some, and it pays off in buckets. It is everything you want in a biography drama and that’s why it’s so good. These are words straight from a person who loves movies yet knows nothing of the late great Johnny Cash. Before I saw this film if you put a gun to my head and told me to sing a line or name the title to one of Cash’s songs I’d be a dead man. Going into the film knowing very little one comes out knowing a lot. The music is great and the actors are terrific. It’s one rockin’ shindig.

One must mention that after the success of last year’s other music biopic Ray we must look at Walk the Line with a clean slate. Comparisons are inevitable. I was lucky enough to go into this film without having seen Ray (although I felt like I had with everyone talking about it constantly) so I never had that film in the back of my mind. Walk the Line is everything that is standard in a biographical drama. We get a glimpse into the star’s childhood and family life. We learn of the trials and tribulations of a person who just wanted to be someone special. We witness our hero’s conventional fall and his eventual rise. And while at first glimpse the film seems just ordinary, it is anything but.

The performances, not surprisingly, is what keeps everything together. Joaquin Phoenix is simply sensational as Mr. Cash. He is not an actor playing Johnny Cash, becomes him. The real surprise here is Reese Witherspoon, as June Carter, who is always fantastic whether it’s teen fare like Legally Blonde or social satire such as Pleasantville or Election. This film no doubt marks a turning point in the young actress’ career. I’m sure an Oscar nomination is hers as well as for Joaquin. Witherspoon nearly steals every scene she’s in which are numerous because of her honestly raw performance. She doesn’t need to take her clothes or makeup off to be just simply moving. She’s the perfect foil for Joaquin. And wouldn’t you know the T-1000, Robert Patrick, turns up as Johnny’s abrasive father. Everyone is excellent from the members of Cash’s band, to Johnny’s first wife (Ginnifer Goodwin).

The story itself is very straightforward with Cash’s drug dependency taking up most of the second act. It is his affection for June that proves love can conquer all. Oh and did I mention the music? The film opens with a distant drumbeat, perhaps a concert being performed miles away and it subtlety gets louder until our unknown performer is about to make his appearance. But it isn’t until we first flashback several years before our musical wants are met. Director James Mangold whets our music appetites and when he finally delivers, he delivers in spades. If anything, the film seems to end abruptly but you’re willing to forgive it because frankly you can’t really have a six-hour film that completely chronicles a man’s entire life. What’s shown is important and worthy of a filmed story and the script does what it’s supposed to do.

Whether or not you know or are even a fan of Cash’s music there’s no denying the emotional weight that comes with each beat of the drum or pluck of the guitar. The music is the film’s heart and it beats on and on. The film’s rhythm makes you want to stand up and dance. Why bother going to see the mundane Rent when you can have emotional performances in a film that has its own heartbeat, and blood pumping through its veins. GRADE: A-
Posted by Chris at 2:57 PM

It's very effortless to find out any matter
on net as compared to textbooks, as I found this piece of writing at this web site.

Your current article normally have got much of really up to date info. Where do you come up with this? Just stating you are very imaginative. Thanks again http://allbarefootrunninggenuine.com

Thanks for discussing your ideas in this article. The other matter is that if a problem occurs with a computer system motherboard, people should not consider the risk of repairing this themselves because if it is not done properly it can lead to permanent damage to the complete laptop. It will always be safe to approach any dealer of your laptop for any repair of its motherboard. They have technicians who’ve an experience in dealing with mobile computer motherboard issues and can make right analysis and perform repairs. https://expert-fiscal.com