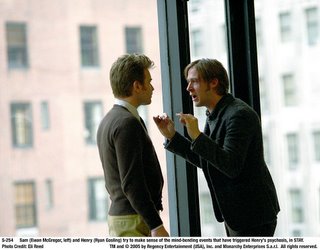 I’m surprised that most viewers in the theater stayed for the whole thing. Stay isn’t really a bad movie; it has its strengths and weaknesses, but I’m not too sure that mainstream audiences are ready for such a headache-inducing foray into the mind of someone who’s going…bonkers. One has to admire the camerawork in Stay, which was directed by Marc Forster. He’s the guy who made Halle Berry come to the Oscar podium and delivered last year’s Finding Neverland. I’m not sure if the word auteur reflects his work, but it’s obvious that he’s trying hard. Or perhaps hardly trying?

We’re introduced to all together psychiatrist Sam (Ewan McGregor) and he has a new patient Henry (The Notebook’s Ryan Gosling). Gosling is the weird art student who wants to kill himself. We’re not really sure why although after a few minutes it’s obvious that the kid seems to be missing a few screws. Before you can say, “Get me a straightjacket,” McGregor is plunged into a mystery about why exactly Henry is planning on offing himself on Saturday at midnight. And when I say mystery I mean it. Soon other characters refer to Sam as Henry, we see people walking around in the background who all have a twin, and simple events keep repeating for Sam in broad daylight ala Groundhog Day.

It’s hard to tell exactly what’s going on for a couple reasons. Forester is keen on finding an original way to move from scene to scene. One interesting segue involves the next shot appearing in a pile of photographs. It’s seems cool at first but can tend to be slightly distracting. You think you begin to have things figured out, such as the idea that Sam and Henry are the same person and it is Henry who is suicidal. After all, there only seems to be real interaction between Henry and Sam. Henry doesn’t really talk to any other characters. This seems way too obvious to be the “twist.” Just when you seem to have it figured out Forester throws a curveball.

So yes the “twist” ending does come eventually, but I’d prefer to call it a resolution because the movie is so twisty that the end seems like the most logical thing in the whole picture. I was genuinely intrigued by the idea. This is one of those films in which after you see it you have to think back to all the points in the film to see if they connect. Most of them do. It’s hard to tell what genre this film is because it’s not really scary (besides a very terrifically intense car accident) and it’s not all that dramatic either. I wouldn’t call it science fiction although it does play around with how we see ourselves and our notion of reality. I’d call it a psychological noir. This is more of film to admire if you like the way it wraps up. But others may see it as ripping off other films that have a lot more to say and are frankly a lot more involving.

A film like The Sixth Sense for instance doesn’t need to RELY on its surprise ending to make it a great film. The ending is a shock and it makes the entire film, that much better. Stay only works when the resolution is revealed. It comes together nicely, but take away the ending and the whole film collapses under its own weight. GRADE: B-
Posted by Chris at 9:43 PM

Greetings! Very useful advice in this particular article!
It is the little changes which will make
the most significant changes. Many thanks for sharing!