Bloodshed 101: “A History of Violence” 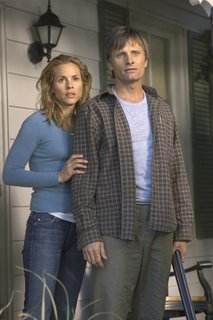 Viggo Mortensen imbues small town innocence with stern ferocity that he almost hides his blood-splattered shirt. As mild-mannered diner owner Tom Stall, Mortensen embodies the soul and heart of wholesome Middle America: a place where blood and violence rarely tred…or does it. In what appears to be David Cronenberg’s most “normal” movie, we are given the story of how violence always seems to lead to even more violence. But are regular audiences ready for a mainstream film from the guy who gave us blood-crazed freaks in Shivers, exploding heads in Scanners and sex-crazed auto collision-philes in Crash?

Having not moved away from his fetish of blood and gore, director Cronenberg has painted a picture of a little Indiana town where, according to the sheriff, only good people live. But what happens when a local family man becomes a hero after brutally killing two men about to rob his eatery? See this film to find out. That’s basically all I can say and that’s basically all that’s given away in the trailer.

The performances are top-notch. Mortensen embodies Tom as if he were born to play the part. It must be good to get to act with real actors and not CGI creatures from all those Lord of the Whatchamacallit movies. There’s nary a green screen in sight. (Although some of that horrid bloodshed seemed a little computer generated to me). Tom is a family man and his family certainly is just plain – ordinary. They eat breakfast and dinner together, have their normal lives and live in their normal house. What secrets really befall them? The oldest child, teenager Jack, played by fresh-faced Ashton Holmes gets his own subplot when he is provoked at school by the popular jock. (This guy is mean, but doesn’t hold a candle to some of the other psychos in this flick) What we have here is echoes of violence that can and IS happening all over the country. Maria Bello is good as Tom’s concerned wife. Ed Harris is a standout as a strange man from Tom’s past. Perhaps Mr. Harris will have yet another supporting actor nomination come Oscar time. His role is short, but extremely affective.

Based on a graphic novel by John Wagner and Vince Locke, Cronenberg has not been credited with writing the film, but rather Josh Olsen has. Perhaps that is why the film seems so “normal” for a Cronenberg film. And that is exactly why this is one of his best movies. Everything from the way it is set up seems vastly unlike anything he’s done before, yet during moments of shocking violence and moments of graphic sex, the viewer is immediately smacked on the side of the head, as if he’s saying “Hey it’s me Cronenberg!” He wants to paint an average little town and he does it extremely well. Everything about how the film is set up works. It is filled with tension because the violent acts come out of moments of shock and desperation.

The film wants to move us and shock us and beat us over the head with its strong imagery. The musical score by Howard Shore is used sparingly but underscores the tension very well. This is a film where you don’t know what’s going to happen next. It messes with your mind… and you’re all the better for it. GRADE: A
Posted by Chris at 9:42 PM

An impressive share! I have just forwarded
this onto a coworker who had been doing a little research on this.
And he actually ordered me lunch simply because I found
it for him... lol. So allow me to reword this....
Thanks for the meal!! But yeah, thanks for spending the time to discuss this
matter here on your blog.


The article is good. Also visit my article, read and share too. God willing useful. :)