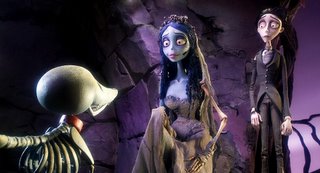 If there’s anything to be learned from Tim Burton’s Corpse Bride, it is that the world of the dead seems much more fun and exciting than the world of the living. The film opens on a black and white world with plenty shades of gray.. At first Mr. Burton’s latest fantastical stop-motion animation fairytale seems dreadfully mournful and unenchanting. What’s even worse is that after five minutes the pear shaped characters with their enormous heads and little chicken legs break out into song. Are we really watching this? Don’t worry, it gets better.

Tim Burton obviously has his heart in the right place, but at first glance his latest pic seems more attempt at being anti-Disney than anything else. However, as the film progress we are treated to a vivid world of corpses. I see dead people. Burton insists on displaying the dead life (?) as more exciting than live life. The characters in the living world include those voiced by a slew of fine actors such as Johnny Depp, Emily Watson, and Christopher Lee. These people parade around as if attending a permanent funeral. Although Burton has always had a flavor for the gothic. Victor (Depp) is a fumbling man who can’t really get his act together. He is to be married to Victoria (perhaps cause their names are so similar?) and her parents are not exactly thrilled. But that’s the way arranged marriages work. Perhaps Burton is making a social commentary that sanctity of marriage isn’t very sacred anymore. Before we know it Victor has messed up his wedding vows and stormed of into the woods ala Jack Skellington in Nightmare Before Christmas. There he “accidentally” weds a dead woman named Emily, voiced by Helena Bonham Carter.

From here Victor is taken to the world of the dead and it hasn’t been this much fun since Beetlejuice. Here we finally get a worthy song from composer Danny Elfman and we do get some interestingly bizarre characters. (Check out the guy who splits himself in half) The imagery here is so lively and magical that you want to forget about the stiffs walking around above in the world of the living. Down here is where the party is.

The picture is very stunning and a worthy successor to the better Nightmare Before Christmas. But after waiting twelve years for another Burton stop-motion movie, after sitting there for only 74 minutes, you’ll have yourself thinking: this is the best they could do? Let’s hope the third time’s the charm. GRADE B-
Posted by Chris at 9:41 PM

These winged warriors, led by the ethereal Leonore (Miranda
Otto), are apparently the good guys, fighting to save humanity from the
evil intent of the demons. Upon Peter Pinkleton-Pish - Posh's return to Britain this individual remarked 'class
will refelect the inner hero', this individual was clearly refering to the impact of clash
of clans hack tool no survey upon today's society.
Perhaps you are of the belief that video gaming is for kids alone.


Here is my blog Clash of Clans Unlimited Gems

If you are a fan of the World Cup then you probably already have plans to get together to celebrate
with family and friends. Nicely, besides the reality they have much more victories than additional football organisation available,
they is not only composed through fantastic players,
however these players also have the actual oneness and also the right attitude every time these
people play their game. Subsequent to the World Cup 1998, Barthez
became a huge celebrity, almost a French equal of David Beckham.