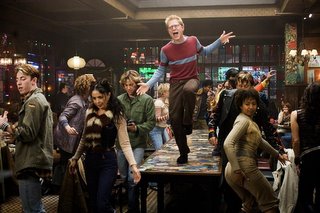 Let’s start out by saying that I love the film version of The Who’s sensational rock opera Tommy. While way back then an entire film sung in a synthesized version of a popular rock n roll album was very new and hip, today it just seems silly. While not from a rock group’s album but rather a smash Broadway musical, Rent as a film isn’t really bad but it isn’t as entertaining as one would hope it would be. How could I enjoy Tommy but not Rent? I’m a fan of the Tommy album and know nearly all the words. Rent is strictly for those who enjoyed the stage version and has little else to offer.

The biggest problem is because the characters are singing to each other most of the time (which I never really found annoying because alas I love Tommy and that is entirely singing mostly off key by the way) we don’t really get to learn much about them except that they have good vocal talents. While it seems that the script is attempting to make each person unique everyone is really the same. The story follows a year (or 525, 600 minutes) in the lives of a group of twenty-somethings in New York’s East Village. The film is supposed to take place on the onslaught of the 1990s but you could have fooled me. There doesn’t seem much of an attempt to make this a period piece, as nothing about the characters’ wardrobes, looks or anything else going on in the background would indicate it is 1989, except for the absence of cell phones.

While the characters themselves are just mildly interesting, their acting counterparts don’t really do them much justice. Most of the original actors from the original Broadway cast return to reprise their roles and with such amazing voices, unfortunately they were meant for the stage. Their facial expressions are more reminiscent of theater than film and it immediately makes me disconnect from them. Stage acting is all about overacting and that doesn’t translate well here. The actors have tremendous range and I was especially surprised by Rosario Dawson. Adam Pascal is also very good and he’d definitely trying. His vocals seemed ripped from The Who’s lips, which is a good thing. The cast does well with what they’re given but by now it’s just like they’re going through the motions. Even the story these characters are given seems to be nothing special. Having not seen the stage version I thought there was going to be a lot more emphasis about the AIDS crisis but alas it seems like more of an unimportant subplot here as is Dawson’s drug habit. AIDS is mentioned in the first 10 minutes of the film and then never seems to be discussed again until about an hour in. The characters sing about making ends meat to pay their rent, clever right, and just go on and on about how their lives are miserable.

For a film that seems to require so much style it’s surprisingly lacking any. Perhaps we should credit director Chris Columbus who is known for his comedies and the first two Harry Potter films. I enjoy his movies but he seems out of place here. I figured since I didn’t know the music too well I would at least be taken in by the beautiful shots usually found in musicals. Alas my eyes were rather bored, although my tapping feet did get quite a good workout. The music is good and inspired and I’m sure is much more fun to listen to on a CD and dance around your room. But when put in context of a filmed story it just doesn’t offer a Rent virgin much of anything. Wasn’t I supposed to feel some kind of emotion at the end? I felt exactly the same as I did in the beginning.

Those who loved the show will surely love the movie. I’m not bashing the film as much it may seem but it’s really no fault of Rent itself, but more of the musical genre itself. I loved the recent filmed version of Phantom of the Opera while many despised it. At least that musical takes place in and around actual operas, so when the characters break out in song it doesn’t seem so unnatural. I understand how non-fans would dislike it. The film Chicago is a great example of a musical that can be enjoyed by everyone. I think I’ll pop the campy Tommy into my DVD player, at least its got Ann-Margret rolling around in baked beans. GRADE: C+
Posted by Chris at 9:47 PM