“The Family Stone:” A Christmas Story That Sinks Like a Rock 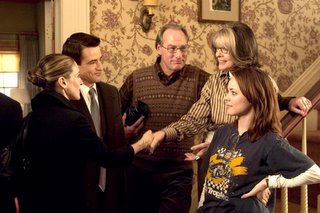 There are some things to enjoy in The Family Stone but on the other hand there’s plenty you want to forget. Watching the film is kind of like getting together with family. You get together with them hoping that it’ll be good but you end up wishing you’ll never have to do it again. The performers in the film are very enjoyable. What they do isn’t. If you’re looking for a fun Christmas movie to watch to get you in the holiday spirit I’d stick with 24 hours of A Christmas Story on TBS.

We have to give credit where credit is due. Fairly new director Thomas Bezucha has assembled an A-list cast (with the mild exception of where-hell-has-he-been Craig T. Nelson) to play the Stone family. Diane Keaton is a pristine, seasoned actress that continues to amaze even when stuck in stuff like this. And this certainly is Rachel McAdams’ year with great roles in Wedding Crashers and Red Eye. Luke Wilson practically plays himself as the youngest Stone(r). Dermot Mulroney is the eldest son whose girlfriend is Sarah Jessica Parker. There is also Tyrone Giordano in a healthy homosexual relationship with Brian J. White. Pregnant daughter Elizabeth Reaser awaits the arrive of her husband. So the family is all home for Christmas and all their little secrets come rushing out to attempt to make us laugh and make us cry. Whether they succeed either way is up in the air.

The main focus of the story involves Meredith (Parker), coming to visit the family for the first time (think Meet the Parents). Unfortunately instead of meeting with the family for a simple dinner, she opts to stay for the weekend. (Don’t these people ever learn!) Why Everett (Mulroney) would bring his obviously city dwelling girlfriend to stay with his wacky, liberal family is beyond me. And why the family despises her SO quickly is beyond me as well. She literally hasn’t gotten out of the car and Amy (McAdams) is already complaining that she doesn’t like her. What could have easily turned into Meet the Parents doesn’t thankfully, as Parker becomes slightly uncomfortable in the house and opts to call her sister Julie (Claire Danes) to come with her and stay in a motel.

Most of the movie involves ways for Meredith to piss off Sybil (Keaton) even though she’s such a warm, loving mother. She prayed for her sons to be gay but alas only one of them is. I can’t very well see Sybil hating Meredith so much since she obviously is so accepting of her own son’s homosexuality. Of course this conflict is what is supposed to give the movie some flavor, but unfortunately it doesn’t. I loved each of the performers but I didn’t really enjoy their roles. I did enjoy Meredith’s role as a woman striving to be accepted into a family that obviously doesn’t know the meaning of the word acceptance.

When Julie enters the picture of course all hell breaks loose because some are going to fall out of love and some are going to fall in love. Not to mention, the movie enters Stepmom territory when we find out that one of the Stone members is fatally ill. Frankly, anything is better than being stuck with these wackjobs. GRADE : C
Posted by Chris at 2:43 PM