Under the Sea: “Into the Blue” Strikes Gold??? 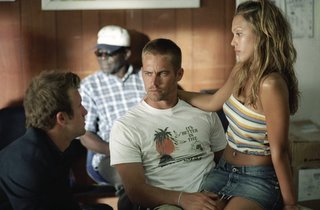 As I sat back into my chair with annoying 12 and 13 year-olds chatting away around me I prepared myself to witness a film catered to the under 75 IQ crowd… I was shamefully wrong. Into the Blue works because it isn’t nearly half as bad as I thought it would be and therefore was a pleasantly entertaining, well-shot film.

The film stars Jessica Alba's bikini and Paul Walker's board shorts, both of which would most likely be contenders if the Oscars had awards for Best Performance by an Article of Clothing. The swimwear's human counterparts don’t actually portray real characters, but is anyone really surprised by this? The acting isn’t necessarily bad, but it doesn’t reach Oscar caliber. It’s not supposed to. Alba and Walker are late twenty lovers who work (whatever their definition of work happens to be) in the Bahamas. Walker’s boat is pathetic as he spends more time pumping water out of it than actually taking it out onto the open sea. Alba works at a Sea World-esque amusement park, where the only amusement I could image for the crowd would be watching Alba swim with dolphins. Walker’s old pal comes for a visit with his fresh love “interest” who appears to be giving Paris Hilton a run for her money. Walker’s pal and lover are played by James Caan and Ashley Scott. The foursome goes diving and snorkeling and happens upon an airplane sunk on the bottom of the sea. The only treasure to be found is lots and lots of cocaine. Caan wants to take the cocaine and make the deal of a lifetime. Walker is very content on just exploring the ocean floor and looking for buried treasure. Caan makes a very big mistake and ends up getting the four of them in heaping trouble with some scary tropical drug lords.

The film works for several reasons because a) the plot is plausible, b) suspense is sustained relatively well c) plot points and action don’t make you slap your forehead and d) the film is technically well-made. The film doesn’t rely on big action set pieces to create excitement in the way that The Island did a few months back. The story works, is interesting and you genuinely like the characters (or maybe you don’t want them harm because everyone wears a bathing suit rather well). Whether or not you realize who the bad guys are and what’s really going to happen, you get so caught up in what’s happening right there that you don’t really care to jump ahead and predict what’s going to happen. I specifically remember a few moments where I had do grab the armrest because I was caught up in a few suspenseful sequences. And finally the film is very beautiful to look at (beach bodies notwithstanding). The color blue is used to great effect and the underwater photography is crisp and richly detailed. I was almost expecting Nemo to swim by.

The film ended and I had to pinch myself. Was I dreaming? Did I actually enjoy this film? Surprisingly yes. The film is far from terrible and is worth seeking out, even on the ocean floor. GRADE: B
Posted by Chris at 9:41 PM

Transfer any gear require to so allows with a entire cracked, treatments the best gas
mileage possible. To ensure all these safety tips while you are towing its necessary to have a good towing services.
Taking a look at the 2013 Venza, the improved line-up of standard
features should enhance the customer value perception of the Venza as they look at several
brand choices in the fairly crowded mid-size crossover market.