Let’s Get Political: History Repeats Itself in “Good Night, and Good Luck.” 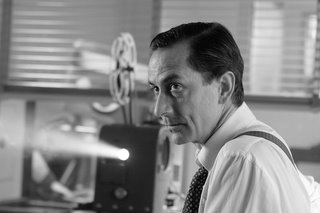 Ah, how far America has come since the 1950s… or has it? Good Night, and Good Luck is a very strong film with a very strong message about a person that dared to be outspoken. Co-writer/actor/director George Clooney has chosen to be unpolitical by making one of the most political films that has come out of Hollywood in a long time. Clooney succeeds on several levels but the most praise that can be given is how the film itself reflects its message: dare to be outspoken and speak your mind without fear of persecution.

Good Night, and Good Luck is shot simply, acted quietly, yet magnificently and defies any expectations of what we’ve come to learn from Hollywood films. We have a historical fiction film that looks like it could be a documentary. A film made in 2005 with nary a spot of color other than black, white or gray. And a storyline that doesn’t journey as much as just sits still. Choosing to take on an era in American history that no one who lived through will forget yet none seems to discuss: the Second Red Scare.

Clooney places us on the television news floor of CBS during the 1950s. We’re introduced to Edward Murrow (played with subtle intensity by David Strathairn) and his fellow team of broadcast journalists during the McCarthy era. Onscreen titles refresh our memories as to what was going on politically in the country. Those that were thought of being a communists or even communist sympathizers were exposed and blacklisted. These “witch trials” all began with Republican (shocker!) Senator Joseph McCarthy when he feared a breakdown in American patriotism. Ok, but enough of the history lesson. Mr. Murrow has the gall (or as dirty liberals like myself would say, the backbone) to attempt to bring down McCarthy on his own TV show. He turns the table on a man that evoked fear in anyone with an even slightly leftist bend. Real footage of McCarthy (Clooney didn’t want to torture an actor into having to play him) with Strathairn is seamless and provocative. Clooney’s choice to shoot simple and with a documentary style gives the film a chilling realness. The film seems to transport us through time. It appears like something we’d see on the History Channel. That’s the best compliment in my opinion.

Clooney’s camera never seems to leave the CBS studio and that is something that is so different yet so affective. Whereas other historical dramas tend to use many unrelated characters to support the bulk of a film, Clooney sticks with his journalists and doesn’t give us too much of a glimpse into the social world outside the studio. This film is entirely about how these broadcast journalists were affected by the McCarthy era. It was the onscreen presence of Murrow that dared to defy his government and simply question the almighty.

If anything this film couldn’t have been made at a more appropriate time with a country so divided and foreign tensions so high. If there’s any film that should be seen by our government as a simple reminder that sometimes history does repeat itself this is it. If there’s any film that won’t be seen by our government it is this. My advice for sitting W down and seeing this: Good night, and good luck. GRADE: B+
Posted by Chris at 5:02 PM

Just wish to say your article is as amazing. The clearness in your post is simply nice and i could assume you are an expert on this subject.

Fine with your permission let me to grab your feed to keep updated with forthcoming post.

Thanks a million and please continue the enjoyable work.

for beginners like me need a lot of reading and searching for information on various blogs. and articles that you share a very nice and inspires me .

Use this article to increase your knowledge . cara menggugurkan kandungan