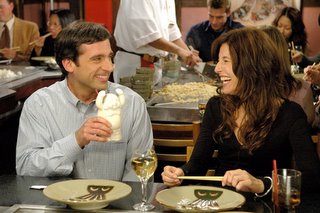 Who knew watching some hairy middle-aged dude try to lose his virginity could be so painstakingly hilarious and heartfelt? In probably the biggest summer surprise, actor/co-writer Steve Carell has delivered a warm and sincere portrait of a man just trying to be himself, with a side of cool to go with it. Carell plays a 40-something stock boy at a Circuit City-type electronic store who has a dastardly secret, no he’s not gay, he doesn’t have eleven toes and he certainly doesn’t have multiple wives; he’s never had sex. The film takes a subject mostly dealt in American Pie type comedies and transplants it into a film that even fifty year olds will enjoy. In fact, at 22 I felt that I was perhaps too young to “get it.” On top of that, I was surrounded by dozens of 16 year olds laughing hysterically. I guess sex comedies are ageless. Besides, aren’t we all sick of watching Jason Biggs trying to do it and seeing his everlasting attempts fail miserably?

I was worried that Steve Carell, while no doubtfully funny in scene-stealing supporting roles in Bruce Almighty and Anchorman, wouldn’t be able to carry an entire picture. Did I mention that the film is nearly two hours as well? Come on people, this is a summer comedy not Forrest Gump. I was amazed that watching Carell and his interactions with his fellow chumpy yet confident yet overwhelmingly insecure co-workers just simply fascinating. Their dialogue is crisp. I never rolled my eyes because these were actually real people. We don’t get sick joke after sick joke JUST to be funny, but it is the situations that lend themselves to comedy and help push the story along as well. Who would have ever thought that would work right? Rob Schneider take note.

Rookie director Judd Apatow deserves credit for taking what could have easily become stale material and breathing new life into it. It’s not so much about Carell being a virgin and forty, but his “coming out” to people he never thought he’d ever be able to socialize with. It is about a grown man finally coming to terms with himself (after all Carell is in many ways like all of us), and the audience is there every step of the way. His life is rigid and repetitive, which is aptly reflected on his bed comforter. Apatow has selected a supporting cast that shines, particularly Paul Rudd whose performances, like a fine wine, get better with age. Does anyone actually remember that he was in Halloween 6? Didn’t think so. And wouldn’t you know that Christopher Guest semi-regular Jane Lynch turns in another amusingly strange turn as Carrel’s odd boss, who feels she just might be the one to deflower our hero. Catherine Keener again plays it straight as Carrel’s love interest. She works at a store where she sells people’s crap on eBay, though nothing in the store is for sale right there. Brilliant. While Keener’s character is warm and likeable, Keener again just seems to look as bored as she always does, as if she means to say, okay let’s get this over with. Minor quibble aside, the cast is uniformly excellent.

A real winner from Universal and, amazingly, none of the best jokes were ruined in the trailer. The film is original, funny, witty and even with all its frank sexuality, never mean-spirited. This isn’t a Farrelly brothers movie after all. Do yourself a favor and check out The 40 Year Old Virgin, if only to watch Carell’s excruciating screams as his chest hair get waxed off. He certainly takes one for the team. That alone is worth the price of admission. GRADE: A-
Posted by Chris at 9:35 PM

What could you suggest about your put up that you made a few days in the past?

Feel free to surf to my website: best shower radio 2014

For the reason that the admin oof this website is working, no doubt
very soon it will be well-known, due to its feature contents.

Feel free to surf to my web-site ... alternatives to viagra