A Rotten Egg: “Chicken Little” is a Turkey 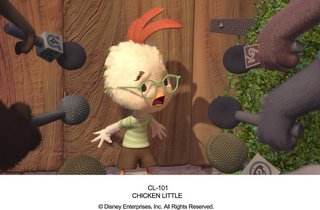 Wow. I bet all of the traditional Disney animators that go laid off must be laughing their butts off. The newest CG animated film Chicken Little is one of the worst movies to be branded with the Disney logo ever. Period. Chicken Little is like eating a sour candy. Your face grimaces. You can feel that acid taste in your mouth and you think that if you keep at it the flavor might just get better but never does. The film is a complete mess from start to finish and just when you think it might actually start to get good it just gets worse. Director Mark Dindal who helmed the amusing Emperor’s New Groove has made a very uneven film.

Where does one begin? Since it’s an animated movie let’s start there. The animation is simply ugly. The characters are so repulsively unattractive that they make those in Corpse Bride look like cartoon supermodels. The film looks muted even with all its pastel colors. Our little hero Chicken Little is the cutest one of the bunch, which is a good thing. He’s surrounded by characters that aren’t just annoying to look at, but have annoying traits and personalities. Little’s friends are all various storybook characters we all know such as The Ugly Duckling (Joan Cusack) and Foxy Loxy (Amy Serdaris) to name a few. The Runt of the Liter (Steve Zahn) is an obnoxious pig with OCD. The characters act so zany that even those with ADD will be irritated. The voiceover work is the film’s greatest asset but that’s no surprise. If you hire A-list actors then you will have A-list voices.

Chicken Little (Zach Braff) is a little troublemaker because one day a piece of blue sky falls on his head, he alerts the town, causes a panic and everyone gets mad at him. And wouldn’t you know his widower dad doesn’t know how to handle the small tyke. This leads to excruciatingly boring scenes in which he feels the need to “prove himself” by joining the school’s baseball team. We get a typically clichéd baseball game just 15 minutes into the movie. How fun! The father-son theme takes up nearly the first half of the film and THEN the film gets going. If I was nine I would have been asleep already.

Finally aliens appear and disappear into the sky and of course leave one of their own behind ala E.T. This sets in motion a plot that should have begun 40 minutes earlier for the alien “invasion” is the most exciting part of the film at which time REM’s “It’s the End of the World As We Know It” blasts on the soundtrack. References to War of the Worlds are taken with a grain of salt. However this seems like more of a copy than an homage. Of course by then it’s too little too late and I’ve already checked my watch about five times.

The film doesn’t overload with pop culture references the way Shark Tale did, but there are plenty of puns that adults will get, which is good right? Wrong! Any attempts at jokes towards anyone over 17 fall miserably flat. The filmmakers have gone so far as to flash the opening scene from Raiders of the Lost Ark at us. The live action film plays in the town’s movie theater as a real boulder comes crashing through their screen. I wish a boulder crashed through my screen so I could end it all.

This is a major downer for Disney. Their recent breakup with Pixar has left their creative team pumping a dry well. This film looked good from its amusing ads and I genuinely was excited to see it. This movie could have been good but I wanted it to end after about four minutes. At least the movie had a rather short running time. Walt himself must be rolling in his grave. Back to the drawing board boys!

Go watch Finding Nemo or Chicken Run ASAP it will help to get the bad taste out of your mouth. GRADE: D
Posted by Chris at 9:46 PM