“The Fog:” Hazy with No Chance of Suspense 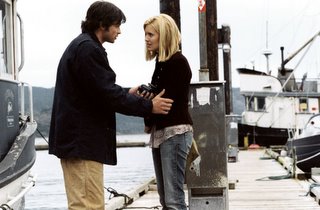 Were you really scared of the ghostly pirates in Pirates of the Caribbean? Were you at all frightened that the CGI skeletons in The Mummy could ever really hurt you? Is there any show on the WB that makes you genuinely terrified? If you answered no to any of the above questions, skip The Fog and do ANYTHING else. The recent remake of John Carpenter’s earlier version of The Fog isn’t an exceptionally horrible film, but it’s just kinda ehh. There are parts during it in which you think, did I lock my car door? I have to run to the supermarket to get milk and eggs. The dog needs to be let out when I get home.

The problem first of all isn’t necessarily the fog itself. I wouldn’t really want to be caught in a white cloud as thick as pea soup knowing there are monstrous beasts within earshot, but those monsters themselves are what drags down the film. While I’m no fan of the original Fog, it had the skills to use its relatively low budget to make the scary attackers real as opposed to something made on an iMac. Instantly you are brought out of the film and you say, “Oh that’s fake.” I’ve seen TV shows with better effects and I’ve seen TV shows with better acting.

Coincidentally the film stars TV regulars Tom Welling of Smallville and Maggie Grace of the outstanding Lost. Welling pretty much plays a fisherman version of his Clark Kent character, except with more stubble and Grace isn’t exactly graceful in the role of Welling’s girlfriend. She walks around the movie with the same expression on her face. (She is my least favorite on Lost anyways) Oh and one question, does anyone ever wear pants while walking around their homes? Other clichéd characters make appearances such as Selma Blair as a twenty-something disc jockey with a kid who appears to be twelve. Mmmhmm. And it wouldn’t be a crappy horror film without the offensively typecast Black sidekick.

Okay, here’s the story: back in the 1800s the founders of this California village murdered some other villagers on their ship and now those that were murdered are coming back, in the fog of course, to get revenge on the descendants of those who killed them. (Now you know why the first film wasn’t exactly exceptional as well) The first film took a strange premise and went with it, and was relatively successful in creating an eerie atmosphere. After coming off of Halloween, creators Carpenter and Debra Hill were hot.

The Fog isn’t horrible. You don’t really expect the film to be terrific so you’re really not too disappointed when it doesn’t excel. There are plenty of jump scares for the weaker crowds, but that’s probably because the film is so darned loud. In regards to the story, you just don’t really care about what’s going on, you just want to figure out what to make for dinner. GRADE: C-
Posted by Chris at 9:42 PM

Excellent post. I was checking constantly this blog and I am inspired!
Very useful information particularly the final
part :) I care for such information much. I was looking for this
certain information for a very long time. Thank
you and good luck.