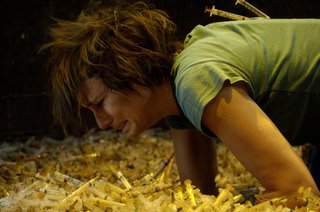 Saw II delivers exactly what is expected: a grisly, bloody film that relies on gruesome death scenes to keep the audience interested. Notice how I said interested and not scared. The deaths in Saw II aren’t really scary, they are very grotesque and it is slightly fascinating to see the various ways in which our characters (if you really want to call them that) bite the dust. Can it be true that people actually enjoy watching people suffer and die? Oh you bet I do. Why do you think Paramount made all those Friday the 13th movies? The gore hounds loved the kills and I’m sure the studio execs loved seeing the critics cringe just as much. Nothing else is very exciting in Saw II, but at least it isn’t The Fog.

Saw II exists simply to make its audience squirm. It fails and it succeeds. The three young girls sitting in front of me shoved their hands into their faces several times. I didn’t. Although there was one scene involving a pit of syringes that made me feel extremely uncomfortable. And I enjoyed every second of it. Roger Ebert has said some movies exist just to be mean-spirited and gruesome like the remake of The Texas Chainsaw Massacre. He says, “The filmmakers want to cause disgust and hopelessness in the audience.” Hey this isn’t The Sound of Music! I say what’s wrong with causing pure disgust? If a film can make you feel uncomfortable (on purpose of course) I think it succeeds. I’ve been waiting to get that off my chest. However, in this film, it only rarely succeeds.

It seems as though our cancer-stricken psycho from the first Saw hasn’t bought the farm yet and decides to trap several more unsuspecting victims. Now, breathing from an oxygen tank and bound by a wheelchair, Mr. Jigsaw has trapped eight people in a house filled with more booby traps than a Home Alone movie. Not a bad feat for someone who can barely breathe. One in the group is the troubled teenager of policeman Donnie Wahlberg. Yes that Wahlberg. It seems Mr. Wahlberg has more of a connection with these people than he realizes.

Now we can get to the good stuff: the death scenes. Most of the characters are annoying and deservedly get slaughtered. Amanda, a survivor from the first film, comes forward as the smart one who knows a thing or too about Jigsaw’s game. At times I actually found myself slightly drawn to her. I wanted to her to be o.k. The rest of the cast dies in excruciatingly bizarre ways, which I won’t spoil here. You’ll have to waste your money to find out what happens.

The film’s “style” if you can even call it that emerges as a kinetic, head-ache inducing rock video with quick edits and full 360 pans. If only director Darren Lynn Bousman could only let his camera stay still. This isn’t a film in which what you don’t see scares you. It is bloody and gory and shots should linger on the gore, which it does after causing motion sickness. Mr. Bousman must have realized his film was so flimsy, cheap and ludicrous that the only way to make it look “cool” would be to just shake the hell out of his camera. His instructions to his editor must have been “make a cut every 1/10th of a second.”

Saw II can’t really overcome its flaws but in a time where every filmmaker cuts out the blood just to let 10 year-olds in, sitting in the theater watching Saw II can’t be that bad right? I can picture the next installment: a madman forces a captive audience to watch Saw IV. The horror. GRADE: C
Posted by Chris at 9:45 PM