Moral Combat: “Jarhead” is a War Film Without the War 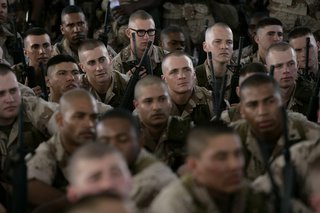 War isn’t funny. It isn’t pretty. It turns innocent people into ruthless killers. The film Jarhead changes all that. If you’re expecting to see men in combat shooting at each other ala Saving Private Ryan or Platoon you’ll be in for a surprise. If you want man on man fighting you’d better rent Fight Club or get your Playstation out. Jarhead, brilliantly directed by Sam Mendes is a war movie with out the war. The entire film, set in 1989 before the onslaught of the first Gulf War, is an anticipation of the horrors that we have seen in other great war films, but never come. These Marines – they are known in “the suck” as empty-headed Jarheads – have been trained to be all they can be to show their loved ones back home that they are willing to fight and die for their country.

The film has a sharp sense of humor that was frankly unexpected and at first slightly awkward. The entire audience seemed to be cracking up while I gazed around in surprise. It’s not that what was said onscreen wasn’t witty or humorous, but going in knowing that this is about the horrors of war one doesn’t expect it to be rib-tickling. I soon found comfort in the humor (the scene in which the soldiers strip for a news crew is funny if not slightly pretentious), because we laugh so we don’t have to face the horrors of life. Why do you think horror films are almost always laced with a sense of humor? We laugh to relieve the tension. That works in a drama as well.

Jake Gyllenhaal is only one of many fantastic actors in this truly ensemble piece. The story is told through his point-of-view much like that of Charlie Sheen in Platoon. The film opens with his enlistment in the Marines and his reason for being there is simply because he “got lost on his way to college.” It’s actually very sad because so many young men and women enlist in the military just because they have no other option. As real-life Anthony Swofford Gyllenhaal brings an emotional electricity that for the first time truly lights up the screen. He’s been good in other films but this is truly his chance to shine. Peter Sarsgaard who is always great gives an Oscar worthy performance as fellow jarhead Troy. And as the Staff Sergeant Jamie Foxx lets us forget he was ever in Stealth. The entire platoon of Marines is great. We see them bond, joke and connect emotionally. We are right there with them from the moment they lay their hands on their first rifles, to the point in which they never have to shoot at the unseen enemy.

The film is technically well made too. Mendes balances the humor and drama well and is more interested in using his frame to his benefit. We get magnificent vistas both colorful and drained of any hue. There are moments in which the background is nothing but a monochrome canvas waiting to be painted. It works so well because we don’t know what’s out there in the endless desert and neither do the soldiers. The editing isn’t flashy. Mendes doesn’t rely on editing to tell his story, but uses it to aid his story. You wont find any nauseating jump cuts here. If you’re looking to have a seizure check out Domino. He also uses his soundtrack to his benefit. When you hear the song “Don’t Worry, Be Happy” coming from the speakers you know this isn’t an ordinary film.

Jarhead is an emotional and witty film that shows what it is like to be a Marine, not in combat, but waiting to be in combat. These men have gone through their training. They watch Apocalypse Now to get “pumped up.” They want to fight. The only battle however is between two scorpions. They signed up to experience the horrors of war. They’ve been taught to shoot at long distances and they are ready for blood. They don’t want to sit in the horrendously hot desert anymore. They want a release. Jarhead isn’t about the horrors of war; it is about the expectations of the horrors of war and what that does to a human being. After all, what could be more horrifying? GRADE: B+
Posted by Chris at 9:44 PM

Usually I do not read article on blogs, but I would like to
say that this write-up very forced me to try and do it! Your writing style has been amazed
me. Thank you, quite great post.