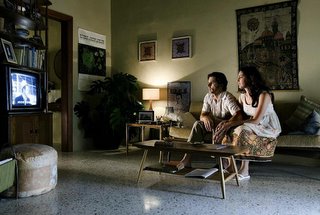 The last time Steven Spielberg made a popcorn adventure and an emotional drama in the same year we got Jurassic Park and Schindler’s List. This year we got the terrific War of the Worlds and now Munich, a suspenseful moral drama that should be getting ready for the Academy Awards. Many people remember the tragedy that occurred during the 1972 Summer Olympics in Munich, Germany. A Palestinian terrorist group known as Black September took several Israeli athletes as hostages, which ended in a bloodbath. What many people don’t know is what happened afterwards. This is that story, told with an obligatory “The following is based on true events” tag that opens the film. This film’s entertaining and artistic success is based very much on Spielberg’s expertise handling of the material. Playwright Tony Kushner (his first screenplay) and Eric Roth has weaved an fascinatingly intricate morality tale. What could have easily been a silly revenge tale is told in a way that is both heartbreakingly realistic and superbly entertaining.

The story is rather easy to follow even if you’re not up on your foreign politics. In a nut shell, the Palestinians and the Israelis are not friends. After the terrorist attack at the Olympics, a small squad of hit men has been ordered, by the Israeli government, to get vengeance on those Palestinians responsible for planning and carrying out the Munich massacre. Now the film obviously takes the side of the Israelis, but should we care about them? Their job is to assassinate the “enemy.” They have been hired to do exactly what the Palestinians did. So is Gandhi correct in saying “An eye for an eye makes the whole world blind?” We have an interesting situation because you care for each of the Israeli men, which includes leader Avner played richly by Eric Bana. Bana has a tough job because he has to make us care about him even though he’s a hired assassin. Of course that’s not too hard because I certainly cared about Angelina Jolie and Brad Pitt as married assassins in Mr. & Mrs. Smith. His team includes Steve the getaway guy (Daniel Craig), Carl the clean up guy (Ciaran Hinds), Robert the bomb maker (Mathieu Kassovitz), and Hans the forger (Hanns Zischler).

Having been stripped of his identity and forced to shield this job offer from his pregnant wife, Avner enters this underground world of ethical depravity with both hesitation and honor. Spielberg handles each murder’s set up with care as he doesn’t make it as if Ocean’s Eleven is planning a robbery. Each premeditated murder is arranged in a slightly different way, complete with terrifically shot tension, which end in the same obvious result: the murder of one man is justice for the murder of another. The movie owes slightly to The Godfather in a way, which I liked, in that this tight nit group becomes a family. They sit around the table eating dinner and joking, because after all they’re human too. The film handles the violence and drama in a similar vein to Saving Private Ryan and Schindler’s List. However Spielberg doesn’t shy away from occasional non-obtrusive comic relief, which was nice. The film is extremely heavy and at times hard to watch, but there’s a reason for it. We live an extremely violent world and that’s obviously reflected onscreen.

Spielberg has made two movies about terrorism in the same year. He’s certainly headed down a much darker path, which is most obviously due to the events of September 11th. I believe this to be a good thing because anyone can realize we live in a world that is much different than that of pre 9/11. The film doesn’t simply shove an important message down your throat. It is a perfect balance of solid popcorn entertainment and intricate human drama. GRADE: A