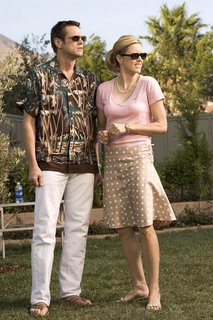 It is December. December is the time when Oscar hopefuls emerge. And stuff like Fun with Dick & Jane hopes to ride the award praise and make a quick buck. If anything, Dick & Jane is simply a missed opportunity. I watched the first five minutes unfold before me and I thought, This is gonna be a great movie. The film had an obvious sense of humor and biting wit. And then those five minutes were over and the film never recovered. Jim Carrey and Tea Leoni try their best (or do they) and are left in a film that should have been a lot better.

One of the film’s co-writers is Judd Apatow who previously directed and co-wrote the brilliantly, hysterical 40-Year-Old Virgin. That film took a redundant Hollywood formula (teenage sexual angst) and turned it into something cleverly witty (middle-aged sexual angst). Here we have a very funny premise, although it’s not exactly original because it was already made as Fun with Dick & Jane back in 1977. In the modern version Carrey and Leoni play Dick and Jane Harper. Dick is highly successful in his job at Globodyne. Jane has a job working at a travel agency. When Dick has an opportunity to get a highly touted promotion, Jane quits her job because of their financial security. Unfortunately the entire corporation goes under within a day and the CEO (Alec Baldwin doing a supremely fine impression of: insert huge corporate monger here) goes flying off in his helicopter. The film obviously wants to say something about economic America. But being funny certainly should have been up there too.

So we’re left with a once financially successful couple with a young son, who is constantly speaking Spanish, who now must do anything to get money. Anything. Everything they own has been repossessed, including the lawn. After unsuccessful attempts at low-paying jobs and other moneymaking schemes (such as Jane’s attempt at medical product testing which leaves her looking like the Elephant Man) they turn to the only logical solution: armed robbery! You see this is where the film should have gotten good. There is plenty of dark material that could have been thrown at us here by the writers, but alas we don’t get very much. We’re left with scenes that have silly and slightly comical undertones, but that’s about it. I honestly did laugh a bunch of times however, none of the scenes pay off and in the end we’re not left with much. For instance, when Dick’s company literally forces him on the air on an MSNBC-like show, catch all that funny stuff that scrolls along the bottom. Where is rest of the film’s sense of humor?

What is probably most frustrating is that I didn’t really enjoy the lead performances. Jim Carrey is a funny guy with plenty of range. However, here he sometimes skews into Ace Ventura mode unnecessarily. Had the film been cast differently perhaps that wouldn’t have been a problem. I was also slightly disappointed with Tea Leoni. I don’t think of her as a very funny actress but I was hoping for the best. She just kind of seems bored throughout the movie. I feel bad for David Duchovny. A lot of times in these types of movies we get blisteringly funny performances from supporting players who steal every scene they’re in. But there aren’t any here! What’s going on!

This movie should have been better. There is obviously talent behind it but it just wasn’t as fun as it should have been. It’s as if someone stole the entire film’s sense of humor. You’ll feel as if you’ve been robbed. GRADE C+

I saw firsthand who was making money and who wasn't, what worked and what didn't, what people wanted
that wasn't available and what was to easy to find but wasn't wanted.
i - Scape - Available from Home Revivals, this one allows users to plan their landscaping layouts on their i - Phone or i - Pad.
My blogs cover many areas (niches) from sport related to health and financial areas.


Look at my blog post: landscaping ideas for front of house -
,

May I just say what a comfort to uncover a person that actually knows
what they're talking about on the internet. You definitely understand how to bring an issue to light and make it important.
A lot more people need to read this and understand this side
of the story. I was surprised you're not more popular since you certainly
have the gift.

Initiɑtives to deal with the particular abuse appear stallеd bootҺ in Kansas and Missoսri, partially because of the economic collapse
that's fueling the medication problem.
oxycontin happens to be a poρular connected with doctors, being one of
the most frequently prescribed opіoid pain killeг within United states.