Woody Allen’s “Anything Else” Could Have Been Something More, Something Else 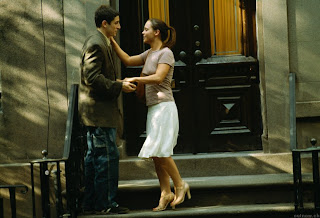 You know something is up when Stockard Channing tells her on-screen daughter Christina Ricci it’s okay to do a line of cocaine. The one drug scene in Woody Allen’s latest movie Anything Else nearly steals the best laughs in the film. In fact, in a scene involving the same drug in his earlier film Annie Hall, Allen receives the funniest laugh when he delivers probably the best onscreen sneeze in all of American cinema. Mr. Allen is there something you’re not telling America? Yeah, the scene in his new film is funny, but almost everything else in Anything Else should have garnered the same amount of laughs.

The story centers on Jerry Falk a neurotic (surprise, surprise) twenty-something comedy writer who is to put it simply, afraid. He can’t say the word no, especially to his manager played by Danny DeVito or to his therapist who ignores him during their sessions. Jerry shares an apartment with his nearly neurotic girlfriend Amanda, played charmingly by Ricci. Their love seems to be going nowhere as Amanda can’t “perform” with Jerry as well as she can with what seems like half a dozen other guys in the movie. As Jerry puts it, “The doctor had better sex examining her than I’ve had in six months.” He’s scared to admit that Amanda just isn’t as committed to their relationship as he is, although she wishes she were. It’s great when Amanda shows up for their anniversary dinner confessing to Jerry that she already ate. “You ate the whole Sarah Lee cream cheese cake?” Jerry replies in surprise.

We get to see their relationship as it seems to be untangling, but not before we get a nice long flashback to when they first met. Amanda tells Jerry that she liked him since they first met. “Couldn’t you tell by the way I was ignoring you?” she informs him. The film goes along like any other romantic comedy, but what sets it apart from the others is Allen’s witty dialogue, which compared to his other films, just isn’t as fresh or, most importantly, as funny. This entire flashback segment treads way too familiar ground. Is this supposed to be a remake of Annie Hall or an original concept?

Allen steps into teen movie territory by casting Biggs in the lead role. Allen not being the center character in the film is the whole problem. By shifting the lead role to Biggs, Allen seems to alienate himself from his own film, coming in to give advice to Jerry. Given the guy is in his late sixties, he sure can be pretty darn funny when it comes to delivering comedic lines. Allen’s films are almost always dialogue driven and in this case Allen doesn’t have enough lines to fill the nearly two hour running time (which was too long for this film’s story). That’s not to say that some of Allen’s lines aren’t hysterical, oh they are. It’s a pure Woody moment when he delivers his witty view of life, “I would commit suicide but I realized that wouldn’t solve all my problems.”

Biggs in the lead role does well enough with the material Allen has written. I’m afraid that with an actor coming from the American Pie films, the teenage audience is expecting raunchy toilet jokes from an R-rated movie. In fact, the movie trailer doesn’t even give one glimpse of Allen’s presence in the film. If you’re expecting to see someone getting walked in on or naked co-eds, look elsewhere. This isn’t about the sight gags but actually about the characters and what motivates them. Biggs does neurosis well as we’ve come to learn from his Pie flicks and his screen time with fellow star Ricci is literally magical. However, there are too many lulls and not enough well timed puns that make up for them.

The film generally works when it’s funny, but seems to drag on and off when it’s not. The film can’t decide whether it strives to be Annie Hall or Manhattan. We care for the characters because they are pretty much pathetic and occasionally funny. Having popular teen movie actors in the lead rolls doesn’t hurt the film, and I definitely commend Allen for not turning the film into American Pie 4 (enough already!). What it all boils down to is this: Allen is a funny guy in a movie that could have been something more, something else. GRADE: C+
Posted by Chris at 9:26 PM

Within the job interview replica watches exposed he is actually planning to report regarding 20 monitors and thus much he's currently completed 7 tunes. I believe we have without a doubt obtained 7 tunes. We are going to attempt to get at close to 20 I believe, as well as hublot replica this from presently there, Donald stated. Approaching the actual discharge day associated with tag heuer replica sale upon July twenty nine, Lionsgate Movies possess asked enthusiasts as well as film rolex replica sale as well to determine much deeper to the crazy adolescent humor through unearthing the actual film's red-colored music group truck. Exposing much more moments, the brand new video clip reveals much more about the replica watches uk embarrassment as well as vengeance the actual 3 figures encounter. Opened up having a picture exactly where Drake Bell's personality Kevin Maker will get left through their sweetheart, the actual collection associated with videos progresses displaying Kevin's canteen speaks along with replica watches uk as well as Morris exactly where Fletcher explains what's going to occur throughout the weekend break trip to the close by university.