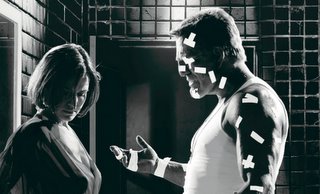 Who knew that bright yellow blood could be so aesthetically pleasing? I’ve never seen a black-and-white film so colorful before. Nearly every shot of the newest noir to hit the multiplex, Sin City, is a visually arresting experience. Every typical film noir element is present: dark shadows, voice-over narration, murder, mystery and shoot-outs. The film is so much more though; it’s a violent coloring book aching to intrigue its audience with its striking visuals.

As directed by Robert Rodriquez (or should I say he everthinged it, my jaw dropped when I saw how many times his name appeared in the opening credits), City is all visual-style and circular plot storytelling. I’m not too familiar with Rodriquez’s works (his most recent films include Once Upon a Time in Mexico and the popular Spy Kid franchise), but he has a daringly Tarantino-style to him. And why shouldn’t he? They’re practically best friends, having worked together on several projects and Rodriquez even invited Tarantino to be his “special guest director.” Tarantino’s segment (I won’t spoil it for you) is pretty obvious and brilliantly directed. Nice job Quentin.

Sin City’s screenplay was written by Frank Millar who also wrote the graphic novels this film is based on. Millar has chosen to tell three different stories and doesn’t really connect them in the same ways other films of this nature do. However, there are the typical crossings of paths of the characters as films with multiple plotlines usually have. Millar really just wants to tell three different stories. It is interesting how the film closes in on itself. The film jumps from one story to the other before the story is fully played out and the audience loses interest. Did I ever lose interest? Not necessarily, though I could imagine getting antsy if only one of these stories were stretched to full length. I enjoyed how the film introduces one story, then the next, then the last, and then works backwards and ends with the first. It doesn’t make confusing time jumps ala Pulp Fiction or Reservoir Dogs but that doesn’t matter.

The film’s most interesting story includes comeback star Mickey Rourke, as Marv, who wants to get revenge on the person who killed Goldie, the hooker he was, um, dating. Rourke is completely transformed, physically and psychologically; he’s weeks away from 9 ½ Weeks and although his face is covered in expertly sculpted garish make-up, his emotions surprisingly shine through. His fight scene with villain Kevin (an especially creepy, yet awesome Elijah Wood) is a highlight. Wood’s character could be a double spokesperson for Converse Shoes and Lee Press On Nails; he is in a word, cool. Clive Owen is very good as Dwight, who is hell-bent on clearing his name for a murder he didn’t commit. He joins forces with a bunch of scantily clad hookers who want to help him save the day. And of course, who could forget Bruce Willis as a soon to be retiring cop trying to stop child pedophile Yellow Bastard (that’s his name, I swear!) played by an unrecognizable Nick Stahl. The lead performances are excellent as are those from supporting players Stahl, Benicio Del Toro, Jaime King and Rosario Dawson. Unfortunately not many of the female actors get much to do besides walk around half-naked and really naked. However, in a film world filled with crime, corruption and Mickey Rouke, would you expect anything else?
How about dialogue, what does Millar make these characters say? Funny lines abound, but not in the typical forceful type of way. In a comic book world, you can’t expect lines to be any less comical than Dwight quipping, “She doesn't quite chop his head off. She makes a Pez dispenser out of him.” And Rodriquez gives credit where credit is due. Millar gets a co-directing recognition because this film is so close to his original works. Nearly every shot is right out of his pages. And why shouldn’t he receive credit? It was his concept from his imagination and it is all there, perfectly translated to film and he was right next to Rodriquez on set everyday.

This film is all about visual style. The way it was filmed is of particular interest. I’ve seen clips from magazines and production photos online, showing how the film was shot mostly in front of a green screen. Green Band-Aids on Rourke’s faced become neon white, dresses become the color of blood, and eyes are piercingly green and blue. For a film shot in black in white, I’ve never seen so much amazing use of primary colors. The art directors must have had a ball with this one. The film, even when gritty and violent, is a visually arresting experience. It’s amazing how the film can make disgusting images beautiful. I haven’t been this awed by a film’s images since the electrically colorful Finding Nemo, as strange as that sounds. I could literally turn off the sound and watch both films and be awe-inspired.

I’m interested to see how the film turns out financially. The studio reportedly only spent $45 million. Not bad for a film that looks like it cost $100 million. So is the film artsy enough for the independent crowd but commercially viable for the popcorn crowd? I believe so, just like Pulp Fiction was nearly ten years ago. Every ten years or so a film comes along that breaks all the rules and starts a trend. Will Sin City do the same for postmodern film noir? If it doesn’t, that would be a sin. GRADE: A-
Posted by Chris at 9:29 PM